A colorful way to honor kings and deities

A colorful way to honor kings and deities 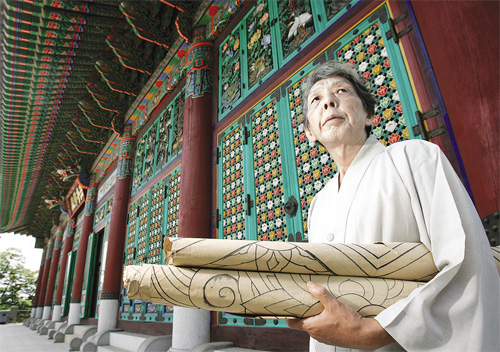 Lee In-sup works on the patterns and primary colors for dancheong in his studio. By Jeong Chi-ho

After four decades working as a dancheong craftsman, painting wooden buildings in traditional Korean style, Lee In-sup has cataracts in his eyes and a ruptured cervical disk. Nevertheless, Lee, 64, claims that he can stay active with his brushes for three more decades. As evidence for his assertion he cites his father, Lee Chi-ho, a respected dancheong craftsman who kept painting until a few days before his death in 2005 at the age of 97. Like his father, Lee In-sup wants to pursue his craft until his fingers stop moving and his eyes can’t tell red from blue.
Dancheong literally means red and blue in Chinese characters, but in Korean it refers to the centuries-old decorative art of painting on the walls, ceilings and pillars of wooden buildings with a palette that uses five main colors. However, Lee frowns on this simple definition of the traditional art.
“It’s more than just a painting,” Lee says, “Dancheong is an art that gives life to a building.”
Lim Young-ju, a scholar of traditional crafts, supports Lee. He says dancheong is “the art of bedecking buildings to make them fit for kings or Buddha by giving them a sense of the sublime.” Lim, who is the author of the book “Dancheong” and leader of the Korean Association for Education in Traditional Crafts, explains that this ornamental art is not confined to architecture. It can also include crafts carved from wood.
Lee says it was his “unavoidable destiny” to pursue the path of a dancheong craftsman. He was born and raised in Bongwon Temple in Seoul, where his father, better known as the Venerable Manbong, his Buddhist name, was based for most of his career.
Lee grew up watching the five main colors of dancheong fly from the tip of his father’s brushes. He earned extra pocket money assisting his father’s work on the dancheong conservation of the Namdaemun Gate, one of Korea’s national treasures. Venerable Manbong, who was a member of a Buddhist order that permits monks to marry, was designated as an “intangible cultural asset” by the Culture Ministry. The ministry assigns the term to dancheong practitioners because the craft itself exists in an invisible and spiritual form. Lee In-sup has been designated as a notable artist by the ministry.
However, it would be wrong to say that Lee was always obedient to his destiny. Like any hot-blooded young man, Lee had dreams of rebellion in his teens and chose to major in Western-style oil painting. “My father was visibly offended, but he did not do anything to stop me,” Lee recalls. Perhaps his father knew that his son would eventually embrace his destiny. Upon graduation, Lee came back to the traditional Korean art. His father was delighted.

From that moment, Lee has spent most of his life up a ladder, painting the ceilings or pillars of wooden buildings. Staring at the five main colors and looking up at the ceiling all day has caused him physical pain, but Lee is happy with his choice of career, and he’s proud to maintain a tradition which developed to honor kings and deities.
“Kings were believed to have been sent from heaven, and their palaces had to be decorated with heavenly beauty,” Lim explains. For much of the last 1,000 years it was illegal for the common people to decorate their houses with dancheong colors, no matter how wealthy they were. Lim notes that some wealthy aristocrats occasionally tried to incorporate patterns based on the dancheong style into their houses to show off their social status, but the practice was discouraged. In principle, only palaces and Buddhist temples were allowed dancheong.
The dancheong way of expressing the “heavenly beauty” of kings and Buddha was to hide the earthly materials of wood and tiles by painting them with primary colors. And not just in a random way, Lim stresses. He claims the colors used have a philosophy based on the five elements theory, which dates back to ancient China and was widely adopted in Northeast Asia. In this theory, the world is made up of five elements ― fire, metal, water, earth and wood.
According to the theory, each substance symbolizes a direction and a color that helped form the world. Fire means south and red; metal means west and white; water means north and black; earth means center and yellow; wood means east and blue. Under the theory, each element has its compatible and incompatible pair. For example, wood and metal are incompatible as metal breaks wood, whereas wood and earth are compatible as wood grows in the earth.
Colors for dancheong are used to represent the colors of the five elements. During painting, the colors are placed according to the directions they represent in a way that avoids incompatible pairs. However, most skilled dancheong painters don’t just use primary colors. They mix pigments to create colorful variations. Lee says that he works with a dozen different hues, with the five main colors used in intricate geometric patterns to splendid, striking effect.
Dancheong, however, was not just intended for decoration, Lim notes. It was a way to preserve wooden buildings, by applying pigments that would lower the danger of erosion and damage by blight and insects.
Hong Chang-won of the Korea Dancheong Research Institute agrees. “Wooden buildings are fragile because they are exposed to rain and wind, not to mention insects,” he says. “The layers of dancheong give protection to the building.” Hong adds that the colors for dancheong contain varying levels of toxicity, as they are made from minerals like copper and bronze, which stop insects from gnawing the wood. He says there is an art to making dancheong colors from minerals and it requires a big budget. 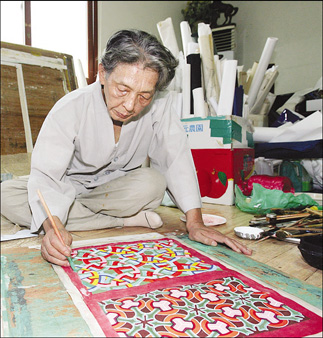 Lee In-sup at the Bongwon Temple, where he painted the buildings to “give them life.” His craft is called dancheong in Korean, and Lee has been a practitioner for 40 years. Below left, dancheong patterns at Bongwon. By Jeong Chi-ho

Lim echoes this point, “Dancheong is expensive work, and thus, in the past, has been available only to the royal family.”
Even in the 21st century, dancheong remains expensive due to the prices charged by the craftsmen, although many paints have been replaced by less expensive chemical varieties. Lee says that it would cost around 100 million won ($110,000) to complete the dancheong painting of the main building of the Bongwon Temple.
And it’s not just the cost of materials, but also the time and effort which pushes the price high. First, a leading craftsman must create a design for the building and decide which patterns should be used. Then, the craftsman and his crew draw life-size designs on pieces of paper.
Next, they use needles to make tiny holes tracing the outlines of the design and lay the punctured sheets of paper on the wood. Craftsmen take powders made with finely ground white seashells and rub them on the paper. The design is stencilled on the building in a series of white dots.
Craftsmen then climb their ladders and apply the colors to the patterns.
“When I go up a ladder, I spend at least four hours up there painting. Only the call of nature can stop me then,” says Lee, smiling.

Dancheong artists tend to develop ruptured cervical disks because they have to look up for extended periods in order to paint. For craftsmen like Lee the condition is like a badge of honor for their years of experience.
There are several dozens of favorite patterns and designs for dancheong, Lee says, showing a few examples that his father passed on to him.
The most favored patterns include auspicious creatures like dragons or phoenixes. Buddhist temples like to use lotuses, as the Buddha is believed to have been born in a lotus flower. The pomegranate is also widely used, as it carries lots of seeds in the fruit, which Koreans have long believed symbolize many children. The patterns are placed in symmetrical form, Lee explains, to suggest order in the universe.
Each color and pattern of dancheong seems bright in color and spectacular in pattern, yet they follow a formula. “Dancheong is the art of using colors to convey the whole universe,” says Lee.