If you believe, you shall see signs

If you believe, you shall see signs 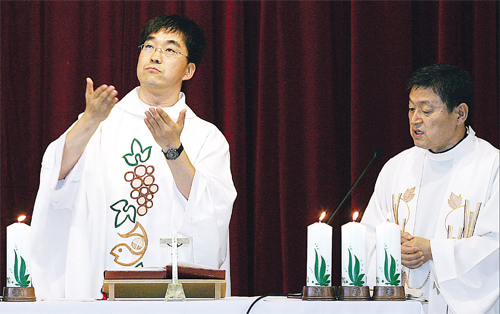 Park Min-seo, (left) baptized as Benedict, performing his first public mass in sign language with the Reverend Cheong Soon-o at the Aehwa Roman Catholic School for children with hearing disabilities. By Kang Uk-hyun

The first mass conducted by Park Min-seo, 39, might have been a silent affair as the recently ordained priest, who is deaf, intended to lead the congregation by using sign language.
The event at the Aehwa School, a Roman Catholic school for deaf children in the Gangbuk District of Seoul, was far from quiet. The place was crowded with children and the noise was almost overwhelming. The mass itself was conducted by voice and sign language.
Around 500 people attended the mass. Many local Catholics considered Park’s first mass to be particularly significant for those suffering from hearing disabilities, since Park is the first deaf man to be ordained as a Roman Catholic priest in Asia.
Many stood throughout the mass, which took more than an hour to finish, even though it looked like their feet hurt, as there weren’t enough chairs to accommodate the large numbers.
Park is more than a religious leader; he is a beacon of hope for the deaf.
Park Soo-mee, 44, is a 20-year-old Catholic and she is deaf.
“Deaf people like myself have always wanted a priest who could perform the mass in fluent sign language,” Park Soo-mee said through an interpreter. “Previously even when a priest held the mass in sign language, it was awkward, like a foreign priest holding a mass in Korean. We have great expectations that we will feel closer to God now that we have a priest who is fluent in sign language.”
After the mass there was a long line of Catholic devotees who wanted to give gifts to the new priest. As they delivered their presents everyone thanked the priest in sign language.
Jang Yong-man, 49, and Park Yong-joo, 50, a married couple who are both deaf, said they came from Gimpo to see Park conduct the mass in sign language.
“The delivery was different from the usual mass we attend,” Park Yong-joo said. At their church in Gimpo an interpreter illustrates the priest’s words with sign language. “I hope Father Park will visit our church.”
Park became the first deaf Roman Catholic priest in Asia when he was ordained with 38 other deacons on July 6 at Jamsil Stadium in Seoul.
He is now one of the 15 Roman Catholic priests in the world who suffer from profound deafness.
For his debut, Roman Catholics came from every corner of the peninsula to this remote part of Seoul.
Worshippers also traveled from the Philippines, the United States and Japan to attend Park’s debut, and his older brother flew from Canada with his daughter and wife to attend the mass.
Park is a good-looking man with a charming smile who seems peaceful and full of serenity, but when he looks back, the young priest says his life has rarely been easy.
He says he has walked a difficult path filled with prejudice.
Park lost his hearing when he was two years old after a bout of measles. He was given the wrong medication and one of the consequences was the complete failure of both of his ears. He can no longer hear sounds of any kind.
“My father worked for the military so we traveled around the country, and for that reason I attended schools with children who had perfect hearing,” Park said through an interpreter.
Young children can be very cruel, especially with children who are different. The young priest recalled that until middle school his classmates would sneer at him and tell him that he was hopeless because he couldn’t hear or speak properly.
Despite the harsh prejudice against people with disabilities, Park persevered and succeeded in getting good scores for the high school entrance exam. But once again Korean society’s negative discrimination against disabled people was too strong for him to overcome.
Park said the school turned down his request for admission after he had an interview with the school administrators, despite his high score in written tests.
Since he could not attend general high school, Park went to the Seoul National School for the Deaf.
Park said his parents were unhappy with his choice of school but he was content and felt he had found a place where he could assimilate.
In high school he started to learn sign language. His parents wanted him to become a painter, just like the famous artist Kim Ki-chang, who is also deaf, so Park began to attend a private institution that taught fine art. Park began to learn about Roman Catholicism. It was the headmaster of the institution, who is also deaf, who suggested that the young high school student attend a Sunday school for the deaf at a church in Sejongno, Seoul.
Park was baptized at Sejongno Church in 1984. He said that while he was being baptized he decided he wanted to spend his life helping other deaf people.
Since high school Park has done a variety of different types of volunteer work for deaf people, including teaching children at Sunday school while working for the Seoul Catholic Association for the Deaf. After graduating from Kyungwon University in 1989, he worked for a company that drew backgrounds for animated feature films.
But volunteer work was not enough to slake his spiritual thirst. He knew he wanted to become a priest. However, once again he was faced with a roadblock. Priests in Korea must be free of all mental and physical disabilities.
Reverend Cheong Soon-o, whom Park met while teaching in Sunday school, suggested he join the Trappist Order for a month. Trappists keep a vow of silence. In October 1990 Park joined a Trappist congregation, but his craving for priesthood only became stronger. 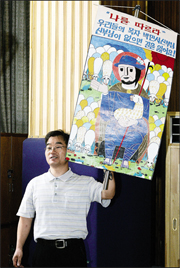 Father Cheong suggested that if Park could not join the priesthood here, he should travel to the United States. Cheong introduced Park to Thomas Coughlin, the first deaf priest in the United States.
In August 1994 Park packed his bags and went to the United States, which was the beginning of a long journey to the priesthood. Park had to learn America sign language. He attended Gallaudet University in Washington, D.C. for a year. Although the English sign language course is a three year program, Park said he finished in 12 months because he wanted to save as much money as possible for the next phase of his studies.
In May of 1999 Park received a degree in philosophy from Gallaudet and was ready to join the St. Joseph’s Seminary, in Yonkers, New York.
Park was able to attend the school as the member of the Archdiocese of Seoul, as he had been granted a scholarship by Korea’s Cardinal Cheong Jin-suk in January 1999. Until then Park had studied at the Gallaudet University, with his tuition paid by the Reverend Cheong Soon-o.
After August 1999 Park studied religion in New York state while living in a dormitory for other deaf students.
His stay at St. Joseph’s Seminary, however, was short-lived. In May 2000, after Cardinal John O’Conner, the head of the New York archdiocese passed away, the dean at St. Joseph’s was changed by the new Cardinal and the man who took the post closed down the school’s programs for deaf students.
Park said he received a letter asking him to leave the school. But hope returned to his life when Coughlin helped Park to enroll at St. John’s University in New York.
In May 2004 Park graduated from St. John’s after earning 30 credits. Then 10 years after he arrived in the United States, Park returned to Korea, where he continued his studies at the Catholic University of Korea’s seminary in Seoul.
“When I first arrived at the seminary, there weren’t many priests or students that could use sign language,” Park said. “They showed an interest, and by the time I graduated in June last year, the number of people who could use sign language had increased.”
A month later Park became a deacon; the first in Korean Roman Catholic history. Unfortunately, the day before he became a deacon, his father passed away. “I really wanted him to see me become a deacon,” Park said. “At least he passed away knowing that I was on the path to becoming a priest.”
Park said his optimism about becoming a priest had now reached a high level. “This confidence helped be drive out any doubts that I had.” He said he realized how many people had prayed for him so he could become a priest and he truly wanted to be ordained. “It wasn’t my personal glory. It was the glory and happiness for people with disabilities just like myself.”
Priest Cheong Soon-o said during Park’s inaugural mass that a German nun was the first to provide a sign-language translation of a Catholic service in Seoul, back in 1940.
“And after 67 years, the first deaf priest is holding a mass,” said Cheong, whose parents are both deaf. “We have waited a long time for this even though there were moments when he was discouraged and faced hardships. From now on he should live his life with confidence.”
Park Woe-seo, the priest’s 45-year-old older brother, said he was proud of what his sibling has achieved. “He has earned his priesthood as a result of overcoming many obstacles,” Park Woe-seo said. “I hope he will not lose his initial desire to help those with hearing disabilities.”
Park Min-seo said after the mass that he had trouble sleeping the previous night and woke up early in the morning because his heart was beating so fast.
By pure coincidence, Park’s first mass took place on his birthday.
“I didn’t know it was my birthday today,” Park said. “I only remembered that it was my birthday when I received celebratory text messages from my friends.”
According to Choi Eun-gyeong, a volunteer from the Seoul Catholic Association for the Deaf, there is a deaf Korean woman now studying in the United States to become a nun. Park hopes she will be the first of many. After his mass, the priest said he realizes the heavy responsibility that now sits on his shoulders. “My goal is the same as always I will be doing everything I can to help those with hearing disabilities.”