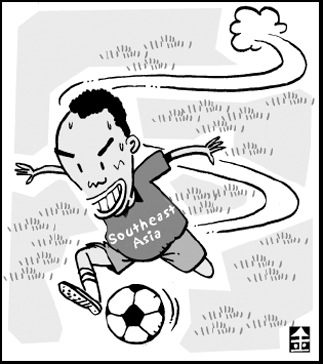 Sir Isaac Newton, who discovered gravity, was a great scientist of his time, but he always felt like something was missing in his life. He focused on wealth to fill this sense of emptiness, which prompted him to invest in the popular South Sea Company. This English company was granted a monopoly to trade with the islands in the South Pacific in January 1720 and it solicited large investments. Hearing rumors that boats would be carrying gold treasures from the New World, the people of England were overwhelmed with speculative frenzy, rushing to invest in this company’s stock. A country-wide frenzy ensued as citizens of all classes developed a feverish interest in investing; they flooded into Exchange Alley everyday.
However, the bubble burst as soon as the South Sea Company’s rosy future turned out to be fraudulent claims. Stock prices of the South Sea Company rose tenfold in the span of 18 months and dropped 84 percent in the following six months. Newton, who believed his personal investments could overcome the law of gravity, lost 20,000 pounds, which amounted to the price of several houses.
At about the same time, across the channel, investment frenzy overcame France as well. In 1717, the Mississippi Company, which obtained from France the monopoly of all commerce between France and French territories in North America, promised 40 percent dividends and went public. Dukes, marquises and earls fought to buy shares, and soon afterward, even maidservants and coachmen jumped into the game. New shares were immediately bought up, and Paris’ Rue de Quincampoix was packed with investors. Mississippi Company stocks rose 20 percent in the span of several hours; however, when this company’s fraudulent scheme was uncovered in the beginning of 1720, stock prices dropped to wretched levels. Mississippi Company stocks, which increased 62-fold in the span of 13 months, dropped 99 percent during the next 13 months.
Domestic stocks have skyrocketed and the key index approaches the 2,000 mark. Although it pales in comparison to the investment frenzy that surrounded the South Sea Company and the Mississippi Company, the investment fervor of individual investors engaging in blind investment is approaching dangerous levels. It has become so severe, presidents of securities companies ― who make a living off commissions from stock transactions ― are preparing countermeasures to cool off an “exuberant stock exchange.” Irrational investment frenzy is the danger signal of an impending financial collapse.