[Talk of the town]Chatting star does too much talking

[Talk of the town]Chatting star does too much talking 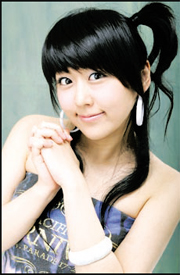 Producers of KBS 2-TV’s program “Chatting Beauties” are in dispute with Saori Jang, their Japanese star. The producers claim Sao-ri has violated her contract by neglecting her duties since signing with an entertainment agency.
The show’s producers claim Saori gained popularity after her introduction on the show and this allowed her to make other appearances.
“We informed [Beauties producer] Lee Ki-won of our management contract with Saori, yet he complains that Saori performs in other programs without prior notification,” said a representative from Saori’s agency.
“Her ‘Beauties’ performance fee of 300,000 won could be too low at this point. That’s why performers like Saori are easily seduced by invitations from other programs or entertainment agencies,” said one television industry professional.
Saori’s “Beauties” contract stipulates she must perform between March 1 andSept. 30. She has been paid for appearances through May 3. If she has violated her contract, she must pay a penalty of three times her performance fee to the show’s producers. By Nam Seung-ji