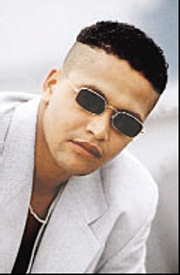 Korean authorities say Lee Man-bok, a former member of 90s dance group Ink, deliberately caused car accidents to collect cash from insurance companies. Six others, including his onetime manager and several backup dancers, have been indicted for collaborating with Lee to collect over 120 million won from victims since 2003. Investigators say Lee, 34, got the insurance fraud idea from his former manager, Kim, who worked as a taxi driver after Ink disbanded. They targeted inexperienced drivers and caused accidents by suddenly switching lanes or stopping abruptly at traffic signals.
Lee topped headlines a few years ago when he revealed on the national Korean talk show, “Good Morning,” that he was “100 percent black.” He performed with Ink under the claim that he was of biracial heritage with a Korean mother and an African-American father. Raised by his adoptive Korean grandmother, she told him about his true ethnic background before her death in 1999.
During its heyday, Ink was known for its innovative dance moves and songs like “Cinderella Complex,” which topped Korean music charts. After Ink’s demise, Lee worked as a D.J. and danced at night clubs. In 2003, he was a founding member of the dance group MIX, which disbanded quickly.
Lee said he was driven to crime because of his financial troubles after quitting the music scene.
By Renee Park