Sleuths seeking the truth in a gray area

Sleuths seeking the truth in a gray area 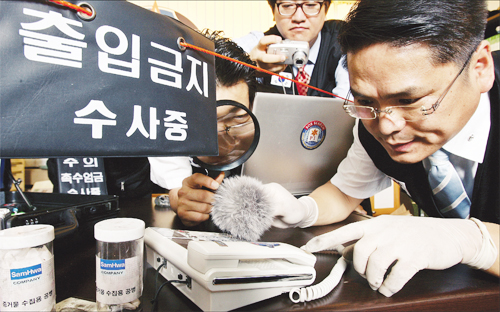 Yoo Woo-jong, right, with his team of private investigators. Although the profession is not legally sanctioned in Korea, Yoo and his crew take pride in their scientific methods and their business is booming. By Ahn Yoon-soo

“Ms. Kim” was an attractive young lady and it was not surprising when “Mr. Jeong’s” only son fell in love with her. Although she looked beautiful, there was something about the way she crossed her legs and did her makeup that seemed fishy to Jeong, an experienced middle school principal.
The biggest question was her educational background. She claimed to have graduated from a good college in Tokyo. As his anxiety grew, Jeong knew where he needed to go to settle his fears ― the office of Yoo Woo-jong, a seasoned private investigator.
Yoo flew to Tokyo and found that the college the girl claimed as her alma mater did not exist and, with a little help from his “network” among the local yakuza (Japanese gangsters), he discovered that Ms. Kim used to work in a hostess bar before she returned to Seoul and faked her identity as she searched for a gullible man to marry.
To gather proof, Yoo secretly recorded a conversation with the bar owner, using a watch that contained a recording device.
After Yoo’s triumphant return, Ms. Kim admitted her lies and broke off the engagement. Yoo earned 8 million won ($8,710) for his successful mission.
“Mr. Jeong told me that it was the best 8 million won that he ever spent,” Yoo said. (Out of loyalty to his customers, Yoo refused to provide the real names of the people in the Ms. Kim case, which took place in 2003.
Yoo has been a private eye for more than a decade and now runs the Association of Korean Private Investigators.
His seamy world has kept him busy, with cases ranging from insurance fraud to industrial spying to a Japanese woman who wanted to verify claims made by her Korean fiance, just to name a few from his current casebook.
Yoo has lots to say about the recent case of art professor Shin Jeong-ah and her fake credentials. Although Shin’s appointment as co-director of the Gwangju Biennale launched a media firestorm when her academic credentials were shown to be fraudulent, Yoo cannot see what all the fuss is about.
“Just give me three days and I can find the facts,” he boasted, “A round trip to Yale University and several phone calls will do the job.”
Ryu Seung-hyun, a private investigator who works with Yoo, agreed. “I think that there must have been a powerful figure protecting her,” he said. “That person must have stopped the verification procedure.”
Although he is ready to take care of the Shin case if asked, he already has his hands full. The number of cases he handles has risen and business is booming.
Yoo began dreaming of becoming a private eye after his uncle died after falling from the balcony of a downtown hotel under suspicious circumstances. “There was room for further investigation of a possible murder charge, but the police seemed to wrap up the investigation without much effort,” Yoo recalled. “After that, I decided to become a private investigator.” After graduating from college, he volunteered for a special commando unit in the army. After his service he went to Germany and Australia, where he received training as a private investigator. 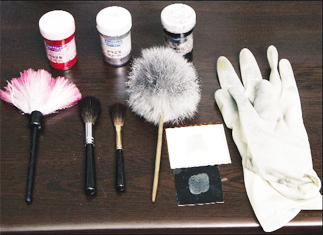 Private investigator Yoo Woo-jong has a briefcase full of equipment for his missions. From left, colored powder and brushes for fingerprints.

“Before I established the private investigators’ association in 2000, the term ‘private eye’ was foreign to Koreans,” Yoo claimed.
His association accepts volunteers from a wide range of professions for training in the skills of private investigation. After instruction in the basics, including elements of forensic science and the use of investigative tools such as hidden cameras, selected volunteers are given Yoo’s certificates of qualification.
Yoo’s office in Euljiro, central Seoul, is filled with slogans like, “Be cold as snow and hot as fire” along with his certificates from Germany and Australia, plus several letters of appreciation from past customers. He is always ready to undertake a mission, and his car is filled with a variety of outfits, from cotton shorts to suits.
“When you are on a mission, nobody should know that you are there,” said You, who described himself as a chameleon. “You have to become part of the scene. The number one rule is to look mediocre.”
In a recent insurance fraud case, he disguised himself as a handyman on a construction site in order to befriend a key witness from the same profession. In an industrial espionage case, he infiltrated a presentation at a company believed to have stolen technology from a rival. He was equipped with a camera hidden in a ballpoint pen.
“After years of experience, I can figure out whether people are telling lies by the movement of their eyes,” Yoo claimed.
However, Yoo has an Achilles’ heel: The private investigation business is not legally sanctioned in Korea and it is not legal for people to call themselves private eyes or detectives, Yoo said. What he does is legal if he is hired by a lawyer, so long as he does not intrude on anyone’s privacy, and around 70 percent of his work comes from the legal profession.
In the strictest sense, it is illegal for Yoo to practice as a private investigator, said Kang Young-sook, a professor of security services at Yongin University. Kang said that the bigger problem is that there is no law that sanctions or regulates the private investigation business, despite the huge demand for such services.
Yoo said he sets clear boundaries to ensure that his business practices are fair. For example, he avoids intruding upon anyone’s privacy.
“I try to ensure my investigations are in the public domain and under the supervision of lawyers,” he said. Yoo also said that his team of investigators tend to specialize in cases of industrial espionage, insurance fraud, protection of intellectual property rights or finding fugitives abroad, rather than looking for evidence of extramarital affairs in Korea. He said cases involving affairs or other illicit relationships tend to involve a greater risk of intruding upon a subject’s privacy.
Such illegalities, Yoo said, take place at so-called “errand centers,” which are registered under the service industry law as places that run errands, such as paying utility bills for busy customers. However, these errand centers have long served as unofficial detective agencies which will “do anything in return for money,” according to Kang. Yoo is repulsed by the idea that his association of private investigators could be associated with errand centers.
“In principle, private investigation remains an area that is not legally approved, and in reality, the government is turning a blind eye to it, leading to more problems of illegality because we lack a necessary law,” Kang explained. She said that a law should be drafted to draw a clear line in what is currently a gray area, to delineate what is legal and illegal.
Legalizing private investigators has long been an ambition of Yoo’s, and he was glad to see two legislators present bills to the National Assembly in 2005 to legalize the profession and define permissible areas of operation.
“The market is already out there, and it’s already active,” said Lee Sang-bae, the Grand National Party legislator who presented one of the bills. “The absence of a law just encourages illegal activities like those performed by errand centers, and it’s time to bring this business into the light.” Lee’s bill would put private investigators under the authority of the police, as they are in most states in the U.S. 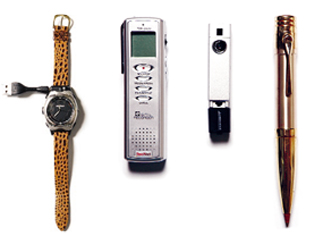 A recorder disguised as a wrist watch, a miniature recorder, a miniature camera and a camera hidden in a ballpoint pen. By Ahn Yoon-soo

Lee’s bill, and another one proposed by Choi Jae-cheon, are pending at the assembly. Both Lee and Choi are hoping to see their bills discussed at the assembly’s upcoming regular session in September, but their prospects do not seem bright, given the political turmoil in the run-up to the presidential election in December.
If the bill passes, Lee said that he thinks the private investigation industry could create some 30,000 jobs and could play a key support role for police and prosecutors.
Yi Won-kon, a prosecutor at the strategic policy planning division of the Justice Ministry, agreed. “Among the member nations of the Organization for Economic Cooperation and Development, Korea is the only one without a law governing private investigation,” Yi said. He added that legalization is necessary to stop foreign private investigation companies from encroaching on the Korean market. Echoing this sentiment, Yoo claimed that major private investigation companies from the United States, such as the Pinkerton Detective Agency, are currently operating in Korea as business consulting firms.
The delay in legislation may dishearten Yoo but it has not dampened his business.
“The police cannot handle everything,” Yoo said. “There are customers who want what we do. Companies, especially conglomerates, tend to shun officialdom when they want to investigate industrial espionage because it may lead to a leak of information, which would be detrimental to them. So they come to us for discreet, effective investigations,” Yoo said, acknowledging that he takes on about four to five new cases a month with fees that vary from several million won to tens of million won, with bonus money on completion. “Unlike the public sector, where diplomacy and formalities are involved, we work from an entirely capitalistic perspective. When we are paid, we get things done fast.”
Under the current legal circumstances, many of Yoo’s private investigators have other jobs, like Jeon Jin-a, who spends weekdays teaching children and weekends doing surveillance.
Does she find it hard to have a double identity? “It is not hard at all,” Jeon said.“It’s fun.”
“After all, we are just human and we commit sins every day,” said Yoo. “If everyone abided by the law, we would have no work. But in reality we have lots of work to do and we always will.”