Tell me more, will it go very far?

Tell me more, will it go very far? 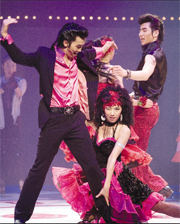 A scene from the Korean production of “Grease.” Provided by Hoam Art Hall

“Grease” is back in Seoul in a new and improved form, running from July 20 to Sept. 9 at Hoam Art Hall.
This is the fifth anniversary of the musical’s debut in Korea. After securing a major venue this year, the organizers say that the upcoming shows will be the most visually-stimulating version of the beloved musical that Korea has seen.
“Grease” (written by Jim Jacobs with music by Warren Casey) has remained a coming-of-age staple, representing the spirit of adolescence, young love and rebellion since its New York Off-Broadway premiere in February 1972. The show was a hit and became a Broadway production later that same year at the Broadhurst Theatre.
Its fame grew with the movie “Grease” in 1978, produced by Paramount and starring John Travolta and Olivia Newton-John. The movie broke records, raking in an estimated $340 million and made John Travolta a household name. Australian pop star Olivia Newton-John’s place in American culture was also secured by “Grease.”
The franchise also had a downhill phase when the movie’s sequel, “Grease 2” flopped at the box office and plans by Paramount to release more sequels as well as a TV series were dropped.
In Korea, the musical “Grease” made its cast members into stars as well, including Um Gi-jun, Oh Man-suk and Lee Young-mi. It also turned entertainers like Jo Yeo-jung and Hong Rok-gi into musical stars.
The soundtrack has become influential with the television commercials for the clothing brand Giordano featuring the A-list stars Go So-young and Jung Woo-sung dancing to “Summer Nights.”