Whitewater rafters get their cool on in Korea

Whitewater rafters get their cool on in Korea 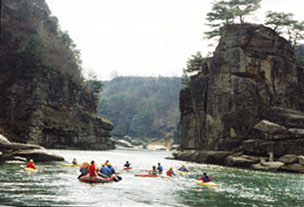 Calm stretch: Rafters enjoy scenery and games in quiet parts of the river.

Trembling slightly, 55-year-old Brenda DeGraffenreid stood on the bank of the Hantan River near the Korean Demilitarized Zone with her shoulders hunched and hands clasped.
A light rain fell on the morning of July 4 as DeGraffenreid, looking frail, cold and a little anxious, joined 30 people for a U.S.O. whitewater raft trip.
Though she can’t swim and fears the water, DeGraffenreid didn’t come halfway around the world to sit this one out.
A high school history teacher from Missouri, DeGraffenreid was in Korea to visit her daughter, Lora Bush, an Army truck driver who has served a year and a half in Korea.
“I went because it was something she wanted to do,” DeGraffenreid said.
Said Bush, “She’s very supportive of me.”
The trip is a great little adventure and a delightful way to get out of the concrete jungle of Seoul and cool off in a lovely river.
The Korean guides are fun, informative and conscientious. They lead water games and encourage chanting in English and Korean as you row.
Rafters are encouraged to tip the boat over in a slow stretch of the river.
But the guides aren’t pushy and are sensitive to kids and the less brave. You feel safe in their hands.
On our trip the boats took turns ramming each other and the crews splashed each other with the oars. 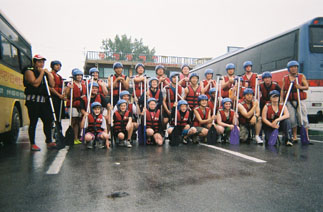 Ready for fun: Rafters pose before the July 4 river run.

This is a full day outing, with a 2.5-hour bus ride back and forth, along with a stop for lunch.
You spend about two hours on the water in Kangwon Island. Our group of 30 floated on four rafts. Helmets and life vests are mandatory.
The Fourth of July was overcast but not cold. The U.S.O. plans additional trips on Aug. 4 and 18, when rafters will definitely need to cool off.
The U.S.O does a very nice job of making the trip family-friendly.
The river is not intimidating, but some of the churning water and exposed rock will get your attention and elevate your heart rate. There are half a dozen frothy mild rapids that provide a jolt of adrenaline, but it’s not extreme sport. It’s simply fun and refreshing with lovely scenery.
For Bush, the trip brought back childhood memories.
“It reminded me of when I was little when we went on canoe trips,” she said. “I liked the scenery around the river.”
Her mother also had a good time.
“Anyone who loves the water would enjoy it,” DeGraffenreid said. “It was beautiful. The rapids were fun.”
Debbie Okray of Detroit, Michigan, made the trip with her children Kira, 13, and Jeffery, 10.
“It was a good family outing,” said Debbie, whose husband Tom works for GM Daewoo.
“I thought it was a great trip for our first time. The guides kept us entertained. And there were enough other things to do besides just the rapids.”
One of the highlights was a stop at a riverbend where rafters could jump off a rock about four meters above the water. Several military men on the tour did flips into the water, with shouts of “Get some,” “Hoo-rah” and “C’mon, Lieutenant!”
One of the rock jumpers was Matt Alaniz, a Navy lieutenant from San Antonio, Texas who is stationed at Yongsan.
“They let us have a lot of good time in the dead areas, like the jump off the rocks,” Alaniz said. “I think it might have been more fun if the water level was higher. But it was a good way to spend the Fourth of July.”
Jose Ruano, 41, an Army mechanic from Florida, enjoyed his first whitewater trip.
“For a first time it was good,” said Ruano. “I think next time I will try something a little more extreme. It was great for families and for having fun without being in too much danger.”
Another military first-timer on the water was Cari Baines, an Army food inspector from Georgia. 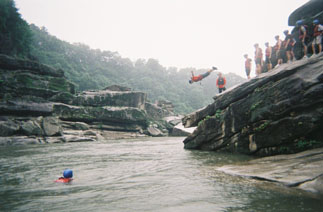 Dive! Rafters can jump off a rock at one stop during the Hantan River run.

“I was scared to death, but I wanted to try something different, so why not,” Baines said. “I had fun and the people in my raft were fun as well.”
Another Army soldier from Georgia, Marzett Grant, did a somersault off the rocks.
“I had a great time,” Grant said. “I really enjoyed myself. I wouldn’t mind doing it again.”
Marzett felt comfortable with the Korean river guides.
“There’s no reason to be scared because the guides know what they’re doing,” he said.
Megan Nacey from Salt Lake City made the trip while visiting her sister, Mollie Bolds, who is stationed in Korea with the Army.
“It was better than going down the Colorado, with the jumping off the rock and all the games,” Nacey said. “We had fantastic guides. They made it a lot more interesting.”
The trip was a family affair for Robert and Denise Lamoureux from Virginia, who brought their children, Colleen, 11, and Jack, 9.
“It’s way more than I expected,” said Denise, a foreign affairs officer at the U.S. Embassy. “We loved it. It’s not too taxing physically. I’d recommend this to anybody.”
An Army engineer and master sergeant, Robert returned to Korea in May after serving a year in Iraq.
“As a family trip, I thought it was excellent because it wasn’t above their level,” Robert said.
“It wasn’t too rough. It was perfect for them. The important thing is we got out of the base and the family was together, and we had an opportunity to see the countryside and got near the DMZ.”
Our U.S.O. volunteer tour guide, Suh Chong-Ki, provided educational tidbits on the two-hour bus ride to and from the river.
He gave a prize to one of the four children on the trip who was able to answer a question about why North Korean mountains have no trees. The answer: to better spot defectors.
After leaving the river, we had lunch, then visited a war museum and a memorial to the fierce battle for White Horse Mountain in the Iron Triangle, a savage Korean War engagement that claimed the lives of 15,000 North Korean troops and 5,000 South Koreans.
Suh also pointed out a marker that designates where three North Korean infiltrators were killed in 1980 along the highway.
It was my first whitewater trip in 30 years, the last being in the North Cascades National Park in Washington State. 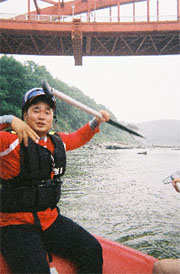 My only disappointment was seeing a pile of trash on one rock. But overall this little river seems to be holding up well despite what must be very heavy use.
The water looked fairly clean and there’s something that just feels right about splashing around in river water.
I’m not sure this is the best rafting river in Korea, but this trip is great value as a family outing.
It isn’t fair to compare the Hantan with the two most gorgeous rivers I know, the spectacular Rogue and Umpqua in my home state of Oregon. But nothing can.
The Hantan does just fine for now.
Take this trip.
You won’t regret it. 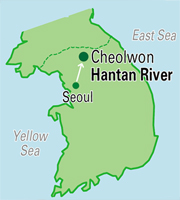 So you wanna get wet!
U.S.O. white-water rafting:
WHAT: The Seoul USO at Camp Kim (across from the Korean War Memorial) offers white water rafting on the Hantan River in Kangwon-do. The trip starts about 108 kilometers (67 miles) northeast of Seoul. You travel 7 kilometers on the river in about 2.5 hours.
WHEN: Day trips are scheduled on Aug. 4 and 18. Two more September trips are to be announced.
PRICE: $49 civilians, $47 military, $44 kids under 12. Price includes round trip bus transportation and a U.S.O. tour guide.
DON’T FORGET: Sun block, lunch money (10,000 to 20,000 won), change of clothes, tennis or water shoes (no flip-flops).
NOTE: Bring a good attitude! You will get very wet. Kids under 12 may have to walk around some rapids, depending on the water level. The decision is made by the guide and must be adhered to.
TIME: Departs 7 a.m. from U.S.O., and returns approximately 5 p.m. Meet at Camp Kim U.S.O. across from the Korean War Memorial at least 15 minutes before departure .
RESERVATIONS/INFORMATION:Call 795-3028 commercial, 724-7003 military.