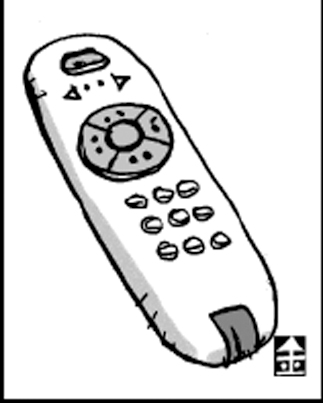 A remote control is a necessary item for a lazy lad. Indeed, it makes perfect sense that those who developed the remote in 1950s named it “lazy bones.”
In the movie “Click,” Adam Sandler obtains a universal remote control that allows him to control his life like a video. When a wife nags, click mute; bored and lazy, fast-forward; fun and exciting, move slow. He can kick an annoying guy by pressing the stop button and feel the romance of a first kiss again with rewind. But what comes to him in the end is regret.
Although not as efficient as the one above, there are universal remotes in real life. It controls not only television, DVD and video but also the air conditioner, the lights and the stereo equipment.
Human remotes exist as well. They are frequent guests on TV debate programs regardless of the topic. They preach whatever issue, be it the economy, security, diplomacy or education. They are the so-called representatives from civil society. Regardless of what they are, they preside over experts with their “morality.” And the social atmosphere gives these people a lot of influence. In the Internet world, anonymous users batter experts as well.
It is now normal for a well-known civil activist to represent about 10 organizations as a co-representative and he not be able to remember all of his official titles. What a marvelous universal remote!
An increasing number of people climbed the social ladder by acting as universal remotes. Professor Yu Suk-choon concluded that one-third of the board members of a famous NGO in Korea called People Power 21, or 150 people, held top government posts over the last 12 years. Other organizations do not differ greatly. Now some involved in civil organizations clearly state they are aiming for government office. Because amateurs are thought of as having more integrity than experts, amateurs claim to have the power to govern the state.
Hoshino Tetsuo, the chairman of Japan’s Gifu Auto Body Industry Co., gave a piece of advice to Koreans “Korea’s manufacturing industry is like an amateur.” The Korean manufacturing industry knows how to mimic, yet does not have the expertise to delve into one area, he added.
The length of a menu and the number of dishes at a restaurant has a disproportionate relationship with the taste of the food. The best restaurants have small menus.
Seeing that capable personalities from every part of society enter politics every election season, the advice of Tetsuo feels more bitter and grave.