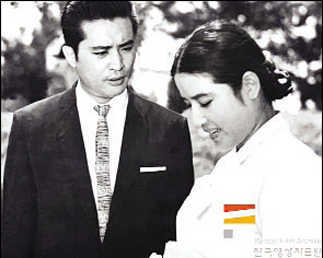 The late Shin Sang-ok was a film director who lived a life that was more like a film. Married to a star actress, kidnapped to (and later escaped from) North Korea and remembered for a prolific, highly acclaimed career, Shin carved his name deep in the history of Korean film. Born in 1926, Shin died last year, leaving behind 75 films that he directed in North and South Korea and Hollywood, along with some 250 films he produced.
In commemoration of the first anniversary of his death, the Korean Film Archive recently released a special DVD package, complete with English subtitles and a documentary on the director. Five films were selected for this collection, including one of Shin’s best known works, “Mother and a Guest” (1961), adapted from Ju Yo-seop’s short story of the same title.
Like the novel, the film is told in the first person by six-year-old Ok-hee, who lives with her widowed mother (Choi Eun-hee, Shin’s wife) under the strong Confucian philosophy shunning remarriage. One day, her uncle brings his friend Mr. Han to board at her house. Her mother is too shy and old-fashioned to talk to the guest, but Ok-hee befriends him and begins to see him as an ideal father figure. It eludes her why her mother blushes or gets strangely angry whenever Mr. Han comes up in conversation, yet makes sure to serve him boiled eggs after learning they are his favorite.
In the narration, Ok-hee frequently asks the viewers why her mother is acting so strange. Shin lets his viewers know that Ok-hee’s mother in fact loves Mr. Han, who reciprocates. Yet under the bondage of ideas against remarriage, she can only show her feelings by playing Chopin’s “Fantasia Impromptu” on the piano and boiling eggs for him.
Shin faithfully follows the original storyline, but truly earns his acclaim by adding dramatic spice to the 103-minute-long feature film. For example, Shin adds a relationship between a maid in Ok-hee’s house and an egg vendor. The juxtaposition of the two romances presents an interesting contradiction that adds dramatic tension. After sweeping box office and film awards at home, the film was presented at the Venice International Film Festival and Academy Awards, carrying on the tradition of winning praise at international film festivals.
The four other feature films also provide a glimpse into Shin’s world of 1960s film. The selection encompasses genres from horror, with “A Thousand Year-Old Fox,” to the family drama “A Romantic Papa.” “Deaf Samryong” is a drama based on a novel about a deaf servant’s tragic love for the lady of his house.
“Seong Chun-hyang,” meanwhile, has been one of the most beloved romances in Korea for centuries, reborn through Shin’s experimental dance sequences and camera movements. “Seong Chun-hyang” opened in 1961 and attracted 380,000 viewers in Seoul, whose population was then 1.5 million. As an added bonus, English subtitles are fairly well done.
Rather disappointing is the collection’s lack of films made in North Korea, although viewers get a fair explanation on Shin’s life in the North in a special documentary.
Produced by the Korean Film Archive, it comes with English subtitles and scenes from Shin’s films from the North, such as “Love, Love, My Love,” one of the country’s first musicals. Interview clips from Shin, his wife and friends offer a chronology of the director’s much-storied life. A bilingual booklet of a critic’s view on Shin’s films supplements the documentary.
As Shin’s friend and producer Hwang Nam said in the documentary, viewers can understand that Shin was a director of no mean pride and talent.