[GAME Review]Warriors of the Lost Empire, and more

[GAME Review]Warriors of the Lost Empire, and more 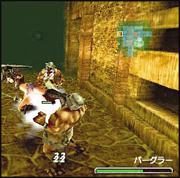 At first, Lost Regnum seemed like an attractive game, but alas, it ended up being about as satisfying as being stood up on a blind date.
In its defense, one of the game’s strengths is its action-packed excitement. Players can choose from a pool of different warriors. The Highlander is a character that uses two-handed swords while the Amazoness’s primary weapon is a bow and arrow.
The Gladiator employs dual swords and the Dark Searcher is armed with a sword and shield. Each character has its own strength and weakness. For those who want flashy acrobatic techniques, the Amazoness is the perfect character, while male characters are more powerful in slashing enemies. Each character also comes with 10 or so spells, which can be used as power tools when fighting off powerful enemies.
As long as the combat itself is fresh, this game is relatively O.K. The graphics are not bad, either, although compared to other high-resolution games, Lost Regnum falls short.
The enemies are relatively satisfactory, considering their wide range of different power levels; some are your basic, no contest, easy-to-kill types, while others are nearly impossible to defeat.
The biggest problem of Lost Regnum is its setting. The player is stuck in a dungeon that seems to change very little between different stages. At some point, players are bound to realize the repetitious nature of the game. It’s like riding a merry-go-round.
Finally, each stage is very short, effectively killing the excitement the game could have offered. By Lee Ho-jeong


Lost Regnum: Warriors of the Lost Empire
Genre: Action
Platform: PSP
Publisher: Ertain
Rating: ★★: Rent it, borrow it, but don't add it to your collection. 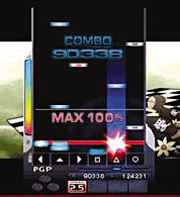 Any member of the beat-box, break-dance generation might have once dreamed of scratching the turntables as a D.J.
D.J. Max Portable 2 has brought these dreams to fruition. Pentavision, the game’s Korean developer, has done a wonderful job maintaining its outstanding reputation earned from the first D.J. Max Portable. It also offers exhilarating excitement with its expanded number of tracks. The newly added tracks have amazing hip tunes and there are a lot of unlockables that elevate the excitement, along with the challenging mission mode.
For those not familiar with D.J. Max Portable, the player must hit the notes that cascade down the screen at precise moments. Of course, some impromptu mixtures and different combos help to earn higher points.
One of the biggest changes for this sequel is how easily the players can now select the song of their choice. In the original version, players had to remember the number of the track they wanted to play, while D.J. Max Portable 2 offers a list in alphabetical order.
While the predecessor had few levels of play, the game’s task of accurately hitting the buttons in time wasn’t necessarily easy. D.J. Max Portable 2, however, offers a more basic level that allows first-time players to easily adjust to the game. Still, in the higher level, correctly hitting the buttons in time to the falling keys is a feat that surely needs a lot of practice.
As a perfect final touch, the game’s many unlockables include new songs, images and characters.
By Lee Ho-jeong