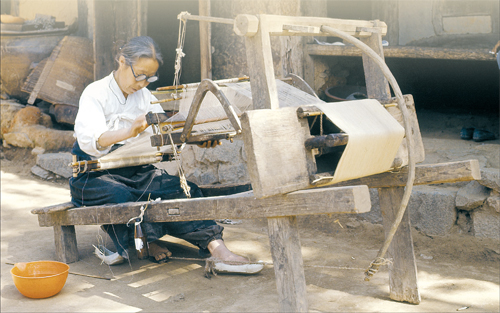 A woman weaving on a traditional loom [JoongAng Ilbo]


Experts say the reason for Korea’s victory against Japan during the attempted invasions of 1592 to 1598, known as imjinwaeran, was its superior ships.
Whereas the Japanese built ships made of cedar or fir, the Koreans used pine trees and skillfully built their ships to be sturdier so that they withstood the strong tides.
Unfortunately, these ships are no longer made as the last Korean boat technician, Park Jeong-ok, did not have an apprentice to take on the craft when he died in 1994. And this is just one example of how Korea’s intangible assets are becoming endangered species.
Traditional-fabric making has a similar problem. Its star is Choi Ok-i, 86, an intangible cultural asset who has been weaving silk in the traditional way, using a Korean loom, since she was nine years old.
She was named an honorable intangible asset last year, after retiring from her profession because of old age. She was originally named an intangible asset by the government in 1988.
Mon Jeong-ok, 79, an intangible asset who makes mosi, or ramie fabric, said that she hasn’t weaved a piece of fabric for several years because of her aching back.
Kim Jeom-soon, 89, made an intangible asset for her work weaving hemp cloth, said that she can no longer make fabric because of her health.
“Even 30 years ago, Koreans wore traditional mosi, sambae [fabric made out of hemp] and myeongju [traditional silk] but nowadays, it’s almost nonexistent because foreign fabrics are much cheaper and more widely sold,” said Kim Ji-wan, the town head of Jukgokli, South Gyeongsang, which is famous for its hemp cloth.
In Jukgokli women from in their 60s, 70s and 80s still join together in the town hall and sing gilssam (hand weaving) songs as they weave hemp and other fabrics. 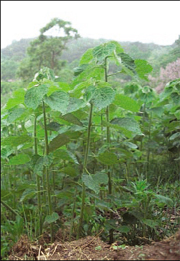 Kim said that 30 to 40 years ago the area was full of people weaving traditional fabric but now there are only thirteen or so active families and most of the work is done by grandmothers who come together and make a few rolls of cloth per year.
“One person makes around 10 rolls per year although halmuni [grandmothers], who are more proficient, can produce up to 30 rolls. The average annual output for the village is around 200 rolls,” said Kim.
One roll is worth around 250,000 won ($272). Unlike Karl Lagerfeld’s knitting technicians in rural France or Japanese kimono makers are who hired by French haute couture houses and get paid hefty salaries, these rural women struggle to make ends meet.
And most of these women are on the level of a professional technician, having worked with hemp for nearly half a century.
Records show that weaving fabric on traditional looms has been a part of women’s lives in Korea since the Gojoseon era (before 108 BC).
In ancient scriptures including “Samguksagi” (The Record of the Three Kingdoms), it is recorded that in the lunar months of July and August, married women would perform gilssam as their mother-in-laws taught them weaving techniques.
Gilssam was usually done in groups, such as one’s town or area of residence. From the picking and cleaning to weaving, it was a group effort.
After foreign fabric started to flow in at cheap prices during the 20th century, the practice of gilssam almost vanished, along with the traditional looms themselves.
Records vary on when and where each fabric was discovered and popularized, but most experts agree that sambae and mosi were used earlier as they are fabrics derived from plants. 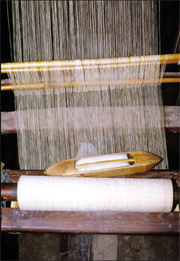 Threads secured on a traditional loom.

Cotton came to Korea during the 14th century when a scholar named Moon Ik-jeom smuggled a cotton plant in from China.
“When cotton came to Korea, the sanitary conditions of the common people were vastly improved because of cotton’s durability and lightness,” said Kim Yeong-jae, a researcher at the National Folk Museum who specializes in Korean fabrics. “During that time, however, as [sambae] and mosi are summer fabrics, and cotton and silks were expensive, Koreans would also weave with reeds in the winter to make a thick fabric which were used for pillows,” she said.
These days, the items in danger of extinction are not only the fabrics themselves but also the looms.
Although traditional looms are said by some fabric makers to produce softer, more intricate fabric, they are less ergonomic.
Uh Bok-in, though, still uses the traditional looms which “are really rare nowadays.” She is the daughter-in-law of intangible asset Bae Boon-ryeong (honored for weaving traditional cloth) who also retired in her old age. Uh said that if she didn’t use traditional looms, which tend to cause damage to the user’s back, rather than the newer versions, nobody else would, but she feels a responsibility to pass down the tradition to her daughter-in-law, Yu Gi-sook.
Take the making of mosi, a favorite summer fabric among Koreans, for instance. The fibers for mosi are prepared by chewing the bark off ramie plants and making thin strands from them.
The strands are rolled together on one’s knees to make longer pieces. 700 to 800 of these strands are then put onto a loom to be woven. The women who have been doing this work for most of their lives suffer from bruised lips, knees and bad backs. 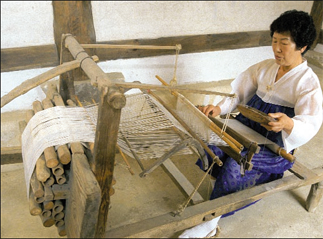 A woman on weaving mosi fabric on a loom.

“The biggest problem in the preservation of traditional fabric manufacturing is finding successors to carry on the traditions,” said Lee Chan-sik, the president of Boseong Sambaeran, a company which sells hemp fabric made by craftsmen in Boseong County, South Jeolla. “Because it requires labor of such high intensity, these craftsmen have a hard time finding apprentices. They don’t even want to teach their children anymore because it is such hard work.”
The highest quality Korean mosi, not to mention the most expensive, is Hansan mosi, made only in the Hansan area of Sochon, South Chungcheong. The mosi here has an extremely fine texture, making it last a long time, which accounts for its crisper, lighter texture.
Mosi is known to be one of the oldest fabrics used in Korea, dating back to the Koryo Dynasty.
During the Joseon dynasty, Hansan’s mosi was in such high demand that government officials had to issue a prohibitory decree to ensure that only people of a certain class were allowed to wear the fabric.
To celebrate nearly 1,000 years of tradition for Hansan mosi, there has been a Hansan Mosi Festival every year in Sochon for the last 17 years.
The county will celebrate its 18th festival this month from July 27 to August 1. There will be various activities for visitors including gilssam dance, a mosi fashion show and intangible assets will demonstrate how to make mosi.
Lee organized and sponsored an exhibition titled “Sambae! A 1,000 Year Old Fabric Wears Color,” at the Seoho Gallery in Insa-dong, northern Seoul earlier this month.
The exhibition showcased various items made from sambae, including clothing, accessories and bags as well as featuring Park Jong-rae, a sambae-maker for 43 years, who demonstrated her craft to visitors.
“Sambae is a great fabric. I’m wearing sambae underwear right now and although I sweat a lot, it readily absorbs and releases the sweat,” said Lee, who also gives lectures at universities on the history of sambae and has represented Korea’s traditional fabric industry overseas. “Sambae craftsmen hardly make enough money to support themselves. Japan’s traditional fabric industry is very well-orchestrated and university degrees on mosi, silk or kimonos have become popular in Tokyo and elsewhere. At this point, the government needs to step in and support this community and make sure that this culture isn’t forgotten.” 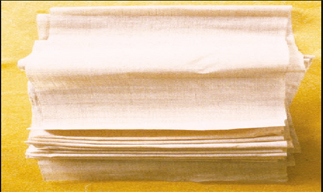 Mosi fabric on a loom.

Kim at the National Folk Museum says although she regrets that traditional fabrics and the craftsmen who make them are disappearing, there is not much we can do at this point to stop them from becoming extinct.

“The fabrics are all hand made and it takes such a long time to make each roll, which ultimately results in a high price,” she said. “To maintain our traditional fabrics, we need to look at new methods of manufacturing. At the moment, mosi and sambae come in cheap from China and are quite popular among senior citizens. To compete with this flood, we need to make the fabric that has a much more affordable price.”