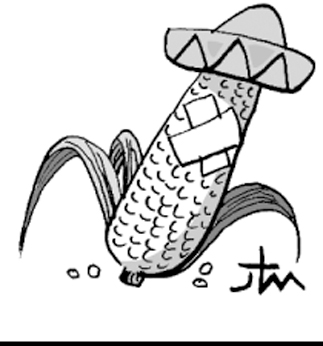 Today’s news is that Mexico, where corn originated, is having a hard time because of the sudden rise in the price of corn.
Last spring, about 120,000 people gathered to protest in the center of Mexico City, raising the government’s tension level.
During the past year, the price of a tortilla has risen to three times its original price. That is because it has gotten hard to secure the cheap American corn that had been imported ever since the two countries signed the North American Free Trade Agreement, or Nafta.
The shortage is not due to a bad corn harvest. It is because of the Bush government’s bio-energy policy planning.
Refining fermented corn makes ethanol. When it is combined with gasoline, ethanol can be used as fuel for automobiles. Because of the record-high oil prices and the unstable situation in the Middle East, the United States is working harder than ever to create bio energy.
President George W. Bush announced in his annual State of the Union address to Congress that the country will reduce its gasoline consumption by 20 percent in the coming decade through the use of bio-fuels.
With bio-fuels factories and gas stations increasing in great numbers, the price of corn is climbing fast, too.
In an effort to meet the national demand, the amount of corn exports has decreased greatly. This is why the Mexicans, who have been a great beneficiary of Nafta for the past 10 years, are demonstrating and calling for a renegotiation of the deal.
Mexicans are not the only ones having a hard time. The Japanese, across the sea, are also affected by the bio energy boom. Livestock farms are closing due to the high price of feed. There is no need to mention that the price of pork and ham has also risen.
Besides corn, the price of other grains has also risen. That is because most farmers have switched to growing corn because they can earn much more, so the production of other grains has declined.
As a result, Japanese factories that made tofu or natto with American corn have reduced the portion of corn in their product and raised its price. In Germany, the price of beer has risen. This is also because barley farms have switched to corn.
This is all because corn is now seen as a useful energy source for the future.
With this new situation, it is now a luxury for other countries to donate corn to war-torn or disaster-ridden areas of the world. In the scramble for corn between automobiles and human beings, it seems that the automobiles are winning.