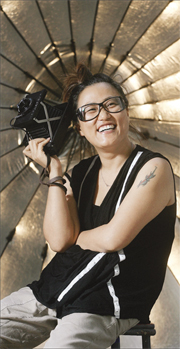 Photographer Zo Sun Hi at her studio with one of her favorite cameras. By Jeong Chi-ho

Zo Sun Hi has a major addiction, but it’s a healthy one ― she loves shooting photographs.
“I can’t imagine life without a camera,” said Zo, sitting in her large white-walled studio as afternoon sunlight trickles in. With a tattoo on her left arm and her hair tied atop her head, she exudes confidence and boldness. Yet her attitude isn’t audacious considering her reputation as a well-known photographer who shoots many high-profile Korean celebrities.
She is one of 12 photographers whose work is now part of an exhibition called “Myth in the mirror,” at the ArtSonje Center in Samcheong-dong, downtown Seoul. Zo is the only female photographer in the exhibition, which opened in May and runs through Aug. 15, Korea’s Independence Day.
Zo, however, isn’t concerned about gender. “Nobody refers to a male photographer by gender,” said Zo. “Why mention the gender of a woman photographer?”
She said it’s the same in other arts, such as writing or painting.
“A photographer is simply a photographer,” Zo said.
Zo had no formal training. Her career began when she joined a group of amateur photographers at a campus club while attending Yonsei University. She majored in clothing and textile design.
Early on, her interest was sparked by a crush on a high school teacher.
“In my second year of high school the teacher started an on-campus photography community,” Zo said. “I wanted to see him every day and the only way to do so was to join the club.” She didn’t have a camera so she asked her mother to buy her one. Her mother offered a deal where she would buy Zo a camera once she was admitted to college. 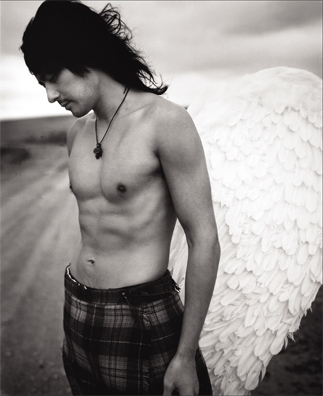 In college she joined the student photographer’s club, “Yonsei Visual Research Club.” The club was a group of amateurs taking mostly documentary pictures, Zo recalled. “Our seniors would intimidate us during the school festival,” Zo said. “There were some that actually got ousted from the club.” Seniors called the club the HTOP, a slightly Konglish abbreviation for “hard training of photo.”
At first she took pictures of anything that came in sight. After preparing for a group exhibition, she started to be enchanted by the snapping sound of her camera shutter.
“It was about then that I hoped to hear the beautiful sound of the camera shutter for the rest of my life,” Zo said.
Positive feedback on her work encouraged Zo to take another step in the world of photography. She began to spend more time at the club’s office than in class. “Some people thought I wasn’t in the same major, and they even thought I was a fake student at school,” Zo said.
By the time she graduated she had a clear vision of what she wanted to do. While most of her colleagues were busy sending resumes to companies, she did the opposite. “I’ve never applied for an office job,” Zo said. “Of course I was nervous. But I knew all I had was photography and nothing else.”
Most of her friends gave up on photography, but Zo created a portfolio using a male dancer and her own sister as models. Zo searched for photographers who would hire her. Although she is bold today, Zo wasn’t as assertive at the time. She had mailed her portfolio to the famous Korean photographer Kim Jung-man, but she never called him because she was too shy. Later, Kim picked Zo as his assistant.
Zo said she was lucky. At the time there weren’t many female photographers.
“I had relatively no competition,” Zo said.
Although she never felt discriminated against because of her gender, she did feel discrimination because she never majored in photography at an academic institution. Some critics were harsh and viewed her as being out of the mainstream.
Zo remembered one time she went to meet a photographer to work as an assistant. “I went to the professional photographer with my portfolio,” Zo said. “He didn’t really say anything mean that I could remember, but by the time I walked out of his office, streams of tears were falling,” Zo said. “There was also a time after I left Kim and opened my own studio when I got a call asking if I wanted to join a group project for a magazine,” Zo said. “I accepted without a second thought; I really needed the work. But after two hours I got a call.The organizer called back and cautiously told me that the other photographers would not work on the project if I was involved.” 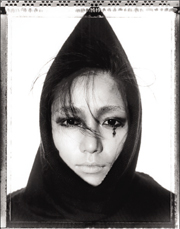 Today Zo said she understands those photographers because they probably thought she wasn’t up to their level. Those obstacles were just small setbacks in her career, however.
After learning the business working as an assistant for Kim, Zo went on to start her own studio. Zo said Kim didn’t teach her every detail about the profession. Instead she learned by looking over his shoulder.
The most difficult time of her life, Zo recalls, was when she first started to work independently. “I would sit by the phone at my studio, hoping it would ring,” Zo said. Her first break came when she took pictures of the actor Lee Jung-jae. The world started to recognize her work and celebrities began lining up to be photographed by Zo. She still says she’s nervous about not having enough work. “Even when I’m not working I have to continuously take pictures,” Zo said.
The first time she experienced public criticism was through the Internet. “On the Internet I saw someone criticizing me, saying that I wasn’t a true photographer because I shoot celebrities,” Zo said. “I never saw it that way,” she added. “To me the term ‘celebrity’ is something that really doesn’t mean anything. I like taking pictures of people and I take pictures of actors and singers ― that’s all there is to it.”
Today she likes to focus her work on expressing death. “I wanted to tell the tale of those who are left behind after their loved ones pass away ― the sadness and coldness that death brings,” Zo said.
Death has been a big issue for Zo. “My father passed away when I was 14 and the image of his coffin entering the ground left a striking impression,” she said. 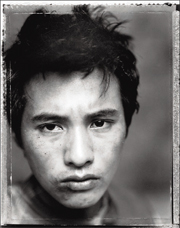 Actor Won Bin. These three pictures are currently on display at the “Myth in the mirror,” exhibition at the ArtSonje Center in downtown Seoul. Provided by Zo Sun Hi

For that reason Zo said the recent exhibition, “Myth in the Mirror,” is very important to her.
“In the past I unintentionally expressed death in my pictures,” Zo said.
An example is a photo of actor Jang Dong-keon wearing a pair of angel wings.
“I asked Jang to put them on and he was kind enough do as I requested,” Zo said. “It wasn’t intentional but I guess I was picturing my late father, who might be an angel today, when I took that picture.”
The photographer said the exhibition has given her a chance to look back on her past work and realize the pictures she wants to take.
“I always had an interest in life and death,” Zo said.
“From now on I will be taking pictures intentionally expressing death.”