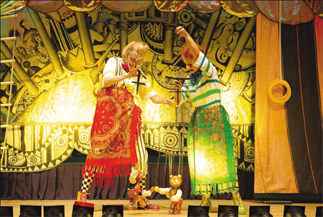 A puppet troupe practices for the opening night of the Puppet Festival Chuncheon in Gangwon. Provided by Chuncheon Puppet Theatre

Brethren of Pinocchio and Kermit the Frog will be holding their annual gathering at the Puppet Festival Chuncheon, 2007.
The festival, held in Gangwon, runs from Aug. 9 to 15 at the Chuncheon Puppet Theatre and Youklim Land as well as other venues in downtown Chuncheon, including a church and a retail store.
Celebrating its 19th anniversary, 37 professional Korean teams, 25 amateur Korean troupes and seven theatrical companies from five countries ― the United States, Israel, France, Italy and Japan ― will be participating in the festival.
On the first day a street parade is scheduled, followed by celebratory fireworks.
In the puppet show “Rain Bird,” the Israeli Train Theater troupe, using origami, will tell the tale of a rain bird that disappears as the forest is replaced by the growing city and the innocent young children who believe in its existence.
One of the two French teams visiting the festival will be displaying the adventures of two mushrooms, while the other will be exhibiting a distinctively unique incorporation of calligraphy, painting and shadow puppets.
The Italian troupe will tell a story of perseverance and respect using animal figures, including rabbits, pigs and rats.
The Japanese team will perform a story of a monk and a witty fox using traditional wooden puppets.
During the event children will have the opportunity to make and create their own puppet show.
According to the festival organizers, Chuncheon Puppet Theater, a train traveling from the Cheongnyangni station in Seoul is specially designated for visitors traveling to the puppet festival.
The train, however, travels only on Aug. 11 from 9 a.m. to 10 p.m.
Train passengers will be entertained with various shows, including a flute performance, a mime show and a puppeteer performance.
Additionally, “Suspended Animation,” a show by American puppeteer Phillip Huber and the Huber Marionettes troupe will be shown.
Tickets are 37,000 won ($40) for those above middle school age and 35,000 won for children.
A 2,000 won discount is offered to groups of 20 or more.
Tickets can be reserved until Aug 6 at Interpark’s Web site at www.interpark.com, or by calling (033) 242-8450.