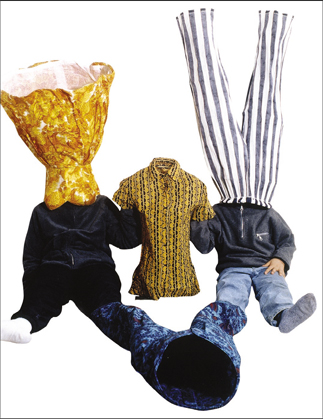 Patrick Tosani’s photo “Once Again 2007.” Provided by the organizer

An early childhood memory often includes a visit to the big top, where families can watch clowns juggle and lions perform.
The scene is so dramatic and magical that many cherish it in their memory as vivid as a photograph.
Those who like to reminisce may enjoy a visit to the Daelim Contemporary Art Museum in Jongno-gu.
Titled “Le Cirque en Majeste” (“The Majestic Circus”), around 90 circus photos selected from the Fonds National d’Art Contemporain (National Foundation of Contemporary Arts), are exhibited throughout the gallery.
“Photographers from all over the world contributed their work,” said Ji Sang-hyun, the curator.
For the exhibition, 17 photographers from nations including France, Germany, Russia and Japan have each presented two to three photographs that best represent the big top. The photographers include Sarah Moon, Rhona Bitner, Balthasar Burkhard, Rene-Jacques and Peter Lindbergh.
“Though they are under the same theme, every piece conveys a different message,” Ji said.
French photographer Patrick Tosani used everyday objects to portray the circus. In his photo called “Once More 2007,” three-dimensional clothing is displayed side by side, upside-down.
“People are always concerned about what truth really is,” said Agnes de Gouvion Saint-Cyr, the French organizer of the exhibition. “In reality too, what seems to be true is false in many cases.” Olivier Rebufa from Senegal also portrays the circus in a photo called “Control” (1998), showing a performer on a tightrope controlling puppets from above. Other photos are of animals, big tops, performers and tightrope walkers.
“The circus today has lost its popularity,” said Ji. “The exhibition tries to bring back the splendid dreams, inspiration and energy that once made us laugh and cope with everyday fatigue.”


The exhibition runs through Oct. 31 at the Daelim Contemporary Museum in Togui-dong, central Seoul. The nearest subway stop is Gyeongbokgung Station, line No. 3, exit 4. Admission is 3,000 won for adults and 2,000 won for students. For information, call (02) 720-0667.