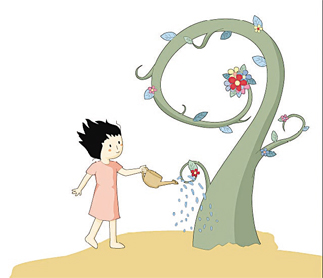 Ever since the popular soap drama “Hourglass,” Jeongdongjin, a small seaside village on the nation’s East Coast, has become a symbol of romance.
On weekend mornings, the tree where the couples from the drama shared a rendezvous is overwhelmed with lovers who took the night train to watch the sunrise. The streets surrounding the train station are a pandemonium of restaurants and cafes catering to tourists.
Despite the cliches involving the drama, the train, the sunrise and the sea, there is another side to the town, this one with an edge. It’s a venue for independent films.
The Jeongdongjin Independent Film and Video Festival opens Aug. 3.
With the catchphrase, “Sky with Fading Stars and Sea of Rising Films,” the festival will start screening in the evening in the playground of a local elementary school. The films will run into the early morning hours.
The list of films in the festival advocate an alternative and independent spirit of art.

A mixture of feature films, shorts, animations and documentaries are on tap.
“Thief Boy” stands out among the festival’s feature films. It’s the story of the daily life of a young boy who can’t quite quit his habit of stealing things.
In the animated film, “Babe Penguin Blues,” the director portrays the short life of a depressed penguin who appears in a low-budget children’s show; “Let’s Eat,” is a heart warming story about people who become friends through eating together.
The festival also includes a whole list of militant films that poignantly capture problems within Korean society, such as “We are KTX Attendants,” a film shot with a 6 millimeter DVD by the train attendants of the KTX bullet train. They were hired as contract workers and have had a long labor struggle with management.

The animated film “Let’s Eat” are among the showings scheduled for the Jeongdongjin Independent Film and Video Festival, which opens one week from tomorrow. Provided by the organizer

In a sharp departure from travel films, the festival will also screen “Road Kill,” a documentary about animal accidents on Korean highways and the politics of speed.

All of the screenings are free. The Jeongdongjin Independent Film and Video Festival runs Aug. 3 to 5 at Jeongdong Elementary School. There are free shuttle buses that run from the festival site through downtown Gangneung at midnight. For more information call (033) 645-7415 or check out www.jiff.co.kr