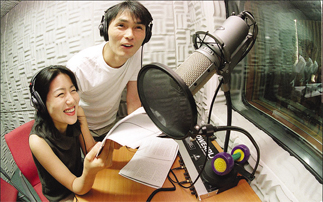 Located in Sampoong Building in Euljiro, central Seoul, radio performers recently were dubbing Cho Yoon-hee’s “I Can’t Understand You” in the Inticube studio.
It seemed like a recording for a radio soap opera at first, but it actually was for a new audiobook.
The increasingly popular audiobook format allows users to download titles to different devices, including PDAs or iPods.
According to the APA, or the Audio Publishing Association, 25 percent of the reading population spends 4.5 hours a week listening to the digitalized books. Downloadable audiobooks comprise about 12 percent of the entire book market.
When it comes to the domestic market, the first audiobook company, Inticube, launched its business last September with three budding artists, 18 producers and three sound designers.
They adapt the original content into soap dramas, short stories or documentaries to attract customers.
Now the company is rolling out 90 new ones each month.
It has focused on romance or self-development genres but may expand to literature, too.
“Now Web sites such as www.audien.com, an online seller of audio- books, has 500,000 members and 250,000 monthly users,” said Kim Seo-hee, an acting manager at Inticube.
Genomad, a digital content provider run by Kyobo Bookstore, also joined the business in March.
They specialize in selling language books recorded by Doosan Dong-A or Communication Todo.
Genomad, however, commissions audio books to certain companies instead of producing the content itself.
Currently, 1,300 programs are available and 700 will be added this year.
The soaring popularity of audiobooks can be attributed to their easy accessibility and relatively low prices.
One book can be stored in two to eight files, each file costing 600 to 1,000 won, half the cost of printed books.
Kim Seong-gon, a 24-year-old student, listens to four to five audiobooks a month.
“I usually listen to audiobooks on the bus or the subway,” Kim said. “Audiobooks are cost-effective and fun to listen to.”
In spite of legal problems regarding authorship and manufacturing costs, audio- book publishers see a strong market in the future.
Park Jeong-ha works at Nan Publishing, which has provided 10 titles to Inticube.
“Audiobooks have not yet generated much profit, but I think they are advantageous tools for public relations. That’s why we decided to invest in them.”