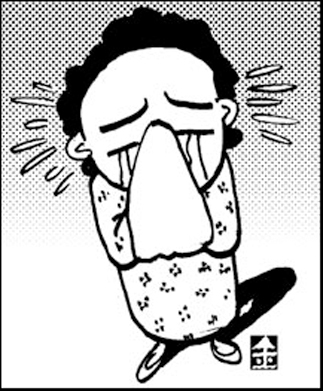 Meng Jiao, a phenomenal poet of the Tang Dynasty, always got support from his mother. Although her son failed the civil service examination many times, she never once frowned on him.
The family was so poor that they spent most of their time just trying to make ends meet. The mother did not hesitate to work laboriously to support her son.
At the age of 46, Meng Jiao finally passed the civil service exam. Yet the late-starter was not lucky enough to make a smooth climb up the hierarchical ladder. The best he could do was to merely carry out administrative duties in the countryside.
That kept him away from his mother. Meng preserved deep gratitudes for his long-separated mother, whom he finally met at his office in what is now Jiangsu Province.
One of the ancient Chinese poems that is widely loved by members of the public is the “Traveling Son,” which describes the love of a mother who sends her son away. Feeling a lump in his throat, he sang a poem to his dear mother:
“A thread is in my fond mother’s hand moving, For the clothes to be worn by her wayward boy.
Carefully she sews and thoroughly she mends,Dreading the delays that will keep him away from home.
Who says the inch-long grass understands For three spring months of the light of the sun?”
The unfathomable depth of love made a poet sing.
Now we are witnessing the same mothers and fathers ache for their 23 children, kidnapped by the Taliban. Eight days have passed since their abduction, and the news from Afghanistan makes them toss and turn with anxiety. Their drawn faces tell us the ordeal they are experiencing.
On the Internet, some people have written postings saying they hope the captives are harmed. Some of the replies translate the Christian mission of the captives in English and pray that they are executed by the Taliban.
Yet it is time to comprehend, above all, the minds of their parents. All of these young captives are the same as our children.
We should produce a concerted effort to keep them alive at a moment when their lives are in grave danger.
Let us cooperate and get our wayward young people back. Scoldings and admonition can wait until they pass safely through over threshold.