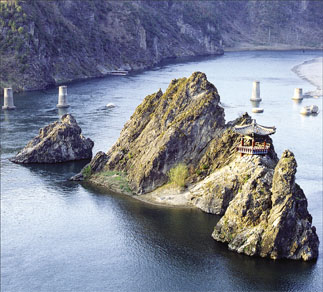 The Dodam Sambong or Dodam Three Peaks, the pride of Danyang. [JoongAng Ilbo]

One of Korea’s finest inland tourist attractions is Danyang, North Chungcheong.
Azaleas in bloom blanket Mount Sobaek in the spring. The beauty that the small provincial vicinity offers provides a magnificent view of Korea’s landscape.
Not far from downtown Danyang, Dodam Sambong, also known as the Three Peaks of Dodam, offers a breathtaking view. The three peaks sit shyly amid the jade-green waters of the Nam Han River. The first impression of the three peaks is of a serene Asian painting that seems to whisper, “Hey, this is a nice place to take a nap while enjoying the peace and tranquility of nature.” With pine trees growing on top of the rocky stones, graceful white cranes perch along the rough edges. A traditional pavilion called Samdojeong, located atop the middle peak, accents the natural beauty. According to a Danyang government official, a respected Joseon Dynasty scholar, Lee Hwang, wrote a poem while sitting on the pavilion that read, “The autumn leaves on the mountains are red, the waters are clear like jade, night falls on the sunset Dodam Sambong, under the starlight and moonlight, golden waves come together.”
Unfortunately, no one is allowed to climb the Samdojeong today. 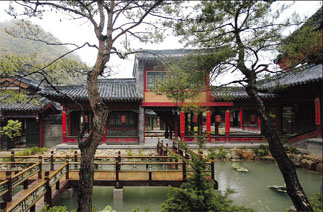 A replica of a Chinese garden on the set for the TV show “Yeongaesomun” located next to the Ondal cave of the Ondal tourist site. By Lee Ho-jeong

The middle of the three peaks of Dodam is called Janggun-bong, literally translated as general peak.
The peak on the right is called Cheop-bong, or mistress peak. The other peak, which is slightly distanced from the other two, is called, Cheo-bong, or peak of the main wife.
A Danyang official says that it was so named because the husband and mistress peaks look as if they are in affectionate embrace, while the wife peak has her back turned against the two at a slight distance.
There is an interesting story behind the peaks, according to the Danyang government.
A long time ago Jeongseon County, Gangwon province claimed that the peaks drifted to Danyang during a heavy flood.
And for that reason they asserted that Danyang should pay a tax, which the small town did.
But one day a young boy, Jeong Do-jeon, questioned the tax payment that was going to the Jeongseon government. The boy said it wasn’t the intention of Danyang ‘s people that the three peaks drift to their ground.
If Jeongseon really wanted them, they could take them back. Since then, Danyang did not have to pay taxes to Jeongseon for the three peaks.
True or not, the tale is an interesting story that brings slight smiles to the faces of listeners.
Slightly downstream from Dodam is Seokmun, or stone gate. The stone gate can be approached by land not far from a parking lot where a ferry travels along the river docks.
Another beautiful site is Sainam, a cliff along the bank of the Ungye Stream.
The cool water of the stream is one way for visitors to beat the summer heat, and the beauty of the cliff adds to the serene experience that the vicinity provides.
The huge rocks on the banks and the bottom of the cliff contain carved Chinese characters as well as ancient game boards, which indicate that many visitors in the distant past enjoyed their leisure time near the stream.
At the bottom of Sainam Cliff is a Buddhist temple, where top-level officials during the Goryeo Dynasty (918-1392) spent their leisure time. On the wall of the cliff, some ancient poets even left poetry. 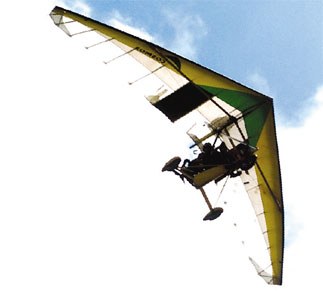 Further east, many tourists recently visited the set of the television show “Yeongaesomun,” named after a general from the Goguryeo (36-668) Dynasty.
The set that replicated Goguryeo and China doesn’t have any real historical significance, but it gives visitors a taste of ancient Asian streets and a fortress, and is a good place to take pictures.
One of the beautiful places within the set is a replica of a Chinese garden, which even has a small pond that looks like it just popped out of a Chinese calligraphy painting. One half expects people dressed in Chinese folk attire to come out and serve tea.
Right next to the film set is Ondal Cave. Ondal is a famous general of the Goguryeo Dynasty. Many Korean children grow up listening to the story of “Dumb Ondal and Princess Pyeonggang.”
The story goes that Ondal was the neighborhood idiot whom the kids made fun of. Later he married the princess, who made him into a wise and brave military general.
Ondal Cave, named after the general, has a huge opening that takes the breath away from anyone who enters its spacious beauty.
And the cool temperature is more refreshing than any air-conditioner.
As one goes deeper in the cave, it gets cramped and visitors have to crouch low to go through the passageway. Safety helmets are provided at the entrance.
Danyang offers more than the beauty of nature. It is also a place for thrill-seekers. At the Doosan Gliding site, located 560 meters above sea level on a hill in Gagok-myeon, visitors can get a bird’s eye view of the river in the mountainous area while riding on a ULM (ultra-light motor) glider, which is powered by a motor propeller.
The experience is mind blowing, even for those with a fear of heights. The ULM takes off after running down an air strip.
The trained pilot controls the plane and takes the passenger to a world of unbelievable sights. Aladdin can keep his flying carpet.
The beautiful scenery of the wooded area and the flowing stream, can be seen beneath your feet in the open air. 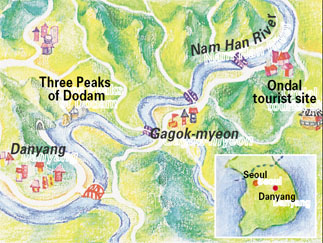 The ULM makes a person feel like he’s flying. The pilots do tend to play tricks, such as making sudden drops, especially with female passengers.
A 10-minute ULM ride costs 35,000 won ($38). For those interested in paragliding, it costs 70,000 won. Ahn Do-hyun runs the airstrip.
For more information and reservations, call (043) 422-4554.