Feeling the passion to coast a little bit? Here’s where to go

Feeling the passion to coast a little bit? Here’s where to go 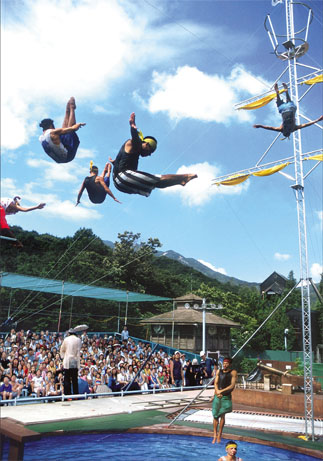 Seoul Land’s stuntmen perform in the pool next to the Viking ride. Provided by Seoul Land

Summer. It’s a time to enjoy tongue-freezing ice-cream, watch horror flicks and most of all, relax and have fun.
What better place is there to take the kids during summer break than the major amusement parks in Korea?
While Seoul Land and Everland have set up special summer festivals during the summer heat, Lotte World, which has been under renovation for the last six months, reopened just in time for summer break.
Here is what Korea’s three biggest amusement parks are offering this summer.
Seoul Land, in Gwacheon, Gyeonggi, has stuntmen dressed as pirates, who perform high-flying acrobatic dives in a pool next to the Viking ride.
The stuntmen jump off a 50-meter-high platform decorated with a huge skull and pirate swords. As an upgrade from last year, the divers added fire to their act.
In the middle of it all, the pirates will duel each other with torches. Water cannons shoot at the audience.
The 30-minute diving show is performed four times a day, at 1:30, 3, 5 and 8 p.m. On weekends, the first show starts at noon.
For those who prefer to stay dry, the amusement park offers a musical water fountain, which dances to the sound of classical tunes.
At its peak, the water fountain shoots 50 meters (165 feet) into the air. The five-minute show happens every hour at the rose garden. 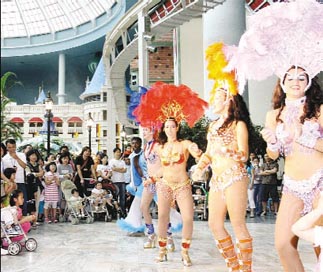 Samba dances at Lotte World, which recently reopened after a six-month renovation.

For a 30,000 won ($32.82) ticket, customers can go on every ride, including the Sky-X, which allows passengers to feel the cool breeze on their faces while hanging by a wire in midair. The ticket also allows continuous refills at the beer garden. That ticket is limited to 160 people per day, and can be ordered only through the amusement park’s Web site at www.seoulland.co.kr. The regular price for a daytime pass to go on every ride is 28,000 won.
Everland, located in Yongin, is a little bit different from the other major amusement parks in the country because the visitors get wet. Really wet. Everland said this summer it has designed its festival into two major programs: “Water Splash” during the day and “Light Splash” after dark.
Two times a day, a parade of cars toting 16 water-shooting cannons and 92 water guns blasts visitors with 84 tons of water. That’s 20 tons more water used than during last year’s festival, according to Everland. The amusement park started the festival in 2005.
Everland also opened a Splash Zone, which allows anyone to squirt water guns at each other while 18 sprinklers soak people who dare to step inside the boundaries.
At night, Everland lights up 1 million lightbulbs around its amusement park, creating a moonlight parade which also features lasers, searchlights and fireworks.
The Water Splash Festival will run through Sept. 2.
This summer is particularly significant for Lotte World, the only amusement park located within the country’s capital, Seoul.
Lotte World closed six months ago due to safety issues, but reopened with a big bang on the first day of this month.
Calling this year “Season Two,” Lotte World hopes its juiced-up entertainment offerings will attract the city folk. The park reopened with a new ticket, “Moonlight,” targeted for daters late at night.
The entrance fee after 7 p.m. is 7,000 won. During the day, the entrance ticket costs 24,000 won. Anyone who wants to go on the rides can buy a 13,000 won ticket after 7 p.m., which is good for three rides.
The park is also starting a late-night parade at 7:30 p.m., a samba performance, “Viva Brazil,” at 8:30 p.m. and a laser show one hour later.
Lotte World has also dressed up its parades. Instead of simply using dancers dressed as cartoonish characters, they are now lit with flashy colorful lightbulbs, which kids watch with amazement. 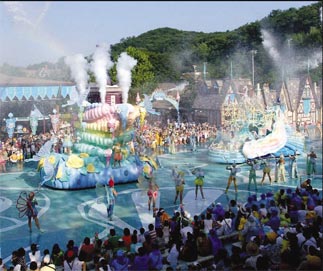 The water shooting parade at Everland. Provided by the amusement parks

However, the upgrades don’t include any new rides, Lotte World said. Some of the rides have been improved, though, particularly the French Revolution rollercoaster. It now enters several caves connected to what is called the Curse of the Pharaoh. When the train swishes through the darkness, it’s truly nerve-wracking.
Another exciting ride at the amusement park is the Atlantis, which is located outdoors. Instead of a slow ride to the top, the Atlantis shoots upward fast enough to push eyeballs back into their sockets. The sheer thrill results in complete loss of one’s voice due to the endless screaming. The only drawback to this ride is that no one taller than 185 centimeters (6 feet, 1/2 inch) is allowed to ride.
Some additional changes include Desperado, an interactive shooting game in which passengers sit on a horse-shaped simulator while shooting bad guys on the monitor.
Another addition is the three-dimensional House of Horror, the first such ride in Korea. It lasts 10 minutes.