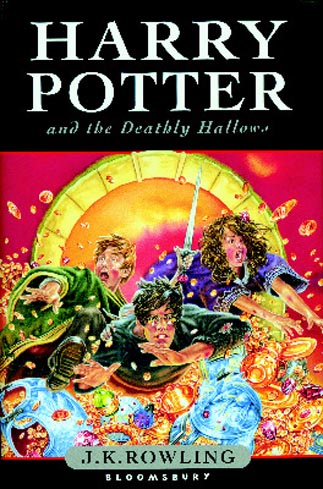 Harry Potter and the Deathly Hallows

Having waited, like millions of fans around the world, a full decade for the Harry Potter series to run its course, the last book inspired feelings of sadness that after a long winter, there will be no new Harry Potter books next summer. At the same time, the prospect of finding the answers to all the questions unresolved from the rest of the series created an electric sense of anticipation.
Front-page headlines from South Korea to Switzerland heralded the book’s release and its immediate entry into the records as the fastest-selling book in history.
Early leaks from a wide range of sources that were difficult to avoid (Author J.K. Rowling even lashed out at the New York Times for running an overly revealing early review) threw die-hard fans into despair at knowing Harry’s fate before being able to unravel it for themselves.
Opening the book, the sense of anticipation is palpable. It is a hefty volume at 607 pages, but somehow Rowling’s books, no matter how long thick may be, never seem to be long enough. Diving in, we find Harry in Privet Drive, where he always is at the beginning of the novels, waiting for the action to begin.
But this year is different: The Dark Lord Voldemort is back, and it quickly becomes clear that the world, which has grown successively darker throughout the past six novels, is at its darkest yet.
Over the subsequent pages, we see Rowling at her best, keeping the reader racing through the pages, their hearts in their throats. She brings the action and emotion to a fever pitch and maintains it for the majority of the book, only to resolve it in a necessarily sugary denouement that neatly finishes the seven-book series and puts an end to questions of whether there will ever be any more Harry Potter books.
The reader experiences a sense of accomplishment in finally reaching the end of the saga, of having all questions resolved and putting the complete puzzle of the wizarding world of Harry Potter away in a corner of their imagination. On a broader scale, readers feel lucky to have been part of the international fervor created by the first release of the series, to have experienced Harry Potter’s introduction to the world firsthand, to have watched the series seep into the fabric of modern culture.
No doubt this sense of fulfillment experienced by mere readers pales in comparison to that felt by Rowling herself. Having completed the last book, she closes the door on what will no doubt be her greatest creation; not only the vulnerable yet powerful Harry Potter himself, but also the explicitly envisioned world in which he functions. She puts to rest the international phenomenon that she created with nothing but her imagination, having earned a reported $1 billion in the process.
With Harry Potter, Rowling boiled down centuries of fantastical lore, steeped it in her own imagination and produced an entire alternate universe complete with laws, history, geography, social structure and deep, dark secrets. She combined elements from distant sources as diverse as “Star Wars” and werewolf legends, making them all her own, and in doing so, gave the world a form that is at once familiar and exhilaratingly new.
There are those who have maintained a distance from the Harry Potter phenomenon, denouncing the series as the literary downfall of generations to come, a bubble-gum distillation of past cultural greatness. But invariably, those people have never read the books.
J.K Rowling
Genre: Mass Hysteria
Publisher: Bloomsbury