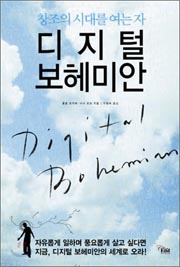 The dream of most Koreans is to make a lot of money doing what they love without the pressure of being a salary worker. In reality most people don’t take that route. One can’t underestimate the stability offered by large institutions.
“Digital Bohemian” by Holm Friebe challenges the reality of everyday life. It raises questions and looks for alternatives by analyzing the lifestyle of “Bohemians in a digital age”. To put it simply, the book explores the life of “digital freelancers” who surf the information wave of the 21st century.
The digital Bohemians are like an Internet version of 19th century gypsies in Eastern Europe. Their incomes are not guaranteed by a company and they earn money by stretching their abilities across a range of corporations. The book describes their lives through various examples from blogs or podcasts in the areas of new media and online games in Germany.
The book, which was put together by an economist and Internet journalist, is not simply an introduction to Internet businesses. It’s also an analysis of various cases and references from the cultural and economic phenomenon of the digital age including new terminologies such as “Smart Mobs,” or a crowd who take a full advantage of mobile phones and the Internet.
Digital culture is characterized through nonlinear, dynamic and versatile ideals. Society is turned into a network while consumers and producers are integrated to open a new age of “prosumers.” Barriers of time and space are dismantled to unite globalization and localization. In fact digital Bohemians are a new elite and many of them occupy positions in high society.
The authors stress “attention to detail, creativity, virtual space services and small manufacturers” as the main conditions of becoming a successful digital Bohemian. It’s a way of gathering profits through Internet sales, auctions, manufacturing and production using creative ideas in virtual space, taking full advantage of e-mails and blogs. The book offers a way to that world.
By Oh Dae-young