Punk rockers with an afterbite

Punk rockers with an afterbite 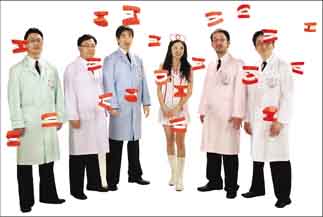 Punk rock emerged in the early ’70s driven by several young artists who rejected the mass commercialism of music. With a do-it-yourself attitude, songs were generally short and aggressive.
Groups such as the Sex Pistols, The Clash, and the Ramones stole the limelight as the premier exponents of the genre. These groups also veered away from mainstream culture as they dealt with the social and political climate of their times.
The Clash addressed youth unemployment and the restlessness of urban life in their song “Career Opportunities” as they sang, “Do you wanna make tea at the BBC?”
In direct contrast to the stance taken by these pioneers, a delightful and humorous punk rock group has made their debut in Korea. They are called 28s, meaning tooth in Korean (the pronunciation of two in Korean is “e” and eight is “pal”).
Although the basic structure of the band, with electric guitars and drums, seems like any other punk band, the members of 28s all have responsible day jobs, which seem like the last thing that a normal green-haired, pierced-tongued punk rocker would have.
“We’re all dentists,” said the leader of the group Peck Seung-yup, 39. “At the same time, we’re rockers.”
A punk rock band without spiky hair and tattered clothes may not seem right. Compared to the Sex Pistols, who badmouthed the British class system and their fellow musicians, the 28s seems to be missing something.
With the group’s first digital single release “28s: 1st Eruption” in May, the five members were determined to establish their identity as rockers, not dentists.
“We want to be acknowledged as musicians,” said Peck. Since the group is not a full-time punk band like Crying Nut or No Brain, the public has judged them simply a high-class leisure group.
“Critics should not judge us by who we are or what we do but by what music we play,” said Peck. He noted that 80 percent of the comments made about them do not focus on their singles but the fact that they’re dentists.
Drummer Hong Ryoon-ki, 46, also said, “When Seotaiji, once a cultural icon, made his debut in 1992, the public had some harsh criticisms, but they were of his music and not him.”
Even their close friends have doubts. Guitarist Lee Min-jae, 47, said, “Friends of my age find punk rock too loud and say that the genre is unsuitable for me. They say I do music just for fun.”
Criticism is also triggered by the group’s humorous and light image.
All five members have nicknames. The oldest member, Lee, is a fore-tooth; Hong, a canine tooth; Pyo Jin-in 41; an implant; Kim Jae-hong, 39; a molar and Peck, a wisdom tooth. Pyo is called an implant because he isn’t a dentist, but a psychiatrist.
Adding to the group’s light image are their three singles.
The group’s title song, “Tooth-lover” is about how exhausted they are with treating patients’ teeth but, in the end, they sing about how precious teeth are to them as dentists.
Peck shouts, “Thanks to teeth, I make a living. I’m a tooth-lover forever.” In this song, the word “tooth” is mentioned 30 times.
The other two are titled, “Brush Your Teeth If You Want to Kiss,” and “Play with Me.”
In order to grab the public’s attention, the 28s and their distributor Manine Media selected three of the 11 demo-songs (all written by Peck) to represent the group.
Surprisingly enough, the 28s are not the first dentists to release an album. Several solo dentist-musicians including EZ (Lee Ji-young) and Hwang Byung-ki have already made their debuts.
But Peck said the 28s are different. “We’re songwriters,” he said, “EZ receives songs from other producers and she isn’t any different from other ballad singers.” Moreover, Hong noted, “EZ has an agency, but we do everything on our own. We don’t have managers.”
Being classified as a punk rock group also makes the 28s different. Peck said, “One of the main elements of punk rock music is being outspoken and frank.”
Like original punk rock, the 28s manage to break down many barriers of expression and language in their songs.
In “Brush Your Teeth If You Want to Kiss,” Peck openly shouts, “People blame their ugly-shaped teeth without even brushing them.” Their single “Play with Daddy” is a warning to all fathers who come home late from work after drinking.
Peck said the album expresses the genre’s frank emotions through simple rhythms and melodies.
“As the guitarist, the title song is the hardest to play,” said Lee, “The beats are difficult to follow.”
When the group performed live for the first time on Lee Moon-sae’s radio program early this month, all five members were busy playing their own parts.
“We were so nervous,” said Lee. “Before the show, we promised each other that we would look into each others’ eyes and keep time, but that didn’t happen.”
Although they are amateurs, the band members have been into music for a long time. All five played in high school or university rock bands and some participated in major music contests like the MBC Campus Music Contest.
The group formed in 2003 as a copy band called ‘Men in Music’ and performed in the Apgujeong-dong and Hongdae areas. The group enjoyed playing Goldfinger’s “99 Red Balloons.”
At that time, the group had six members. But due to time constraints and lack of practice, two left the group and only four remained. (Pyo joined the group as a guest-member this year.)
Now the 28s want to keep rock’n’rolling.
The group practices every Wednesday evening to improve their live performances, and they hope to appear on the TV show “Yoon Do-hyun’s Love Letter.”
“But before that, we need to find our musical color first,” said Peck. He means not as dentists, but as rockers.