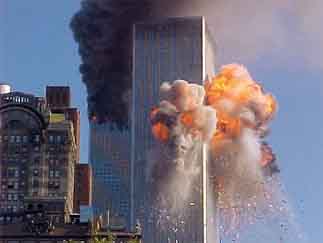 President Bush has just received an intelligence report from his top counter-terrorism advisers. It concludes that the United States is losing ground in its fight against Al Qaeda. It is bad news, but certainly not surprising.
Since Sept. 11, terrorism has been part of our daily life. To some experts, the international community has entered a new historical era. Terrorism is now the main threat to the world’s security.
This statement is both controversial and obvious ― controversial because terrorism did not appear out of the blue on 9/11. No doubt that these tragic attacks are historic events. But they have not radically changed the structure of international relations. The balance of forces among great powers has not really been modified, nor has the nature of the huge challenges the world must cope with. For instance, the lack of access to drinking water or the spread of small weapons are much more deadly than terrorist attacks. As a global threat to the very existence of mankind, climate change and global warming are also more dangerous.
Nevertheless, terrorism turns out to be an uncontested challenge. The most powerful country on Earth, the United States, has defined it as its strategic priority. The same preoccupation exists among most of its allies. According to recurrent polls, in public opinions it is the utmost source of concern, at least in developed countries. Therefore we must live with terrorism. It is a long-lasting challenge which will not disappear soon and quickly.
Condemnation of terrorism is almost unanimous. Its definition is more difficult. Those considered terrorists by some people are called resistance fighters by others. So it seems to be impossible to rely on motives to define terrorism.
A common approach to terrorism could be suggested as such: it is a violent action, engaged in for political reasons and aimed at hurting civilians in an indiscriminate way. For this reason it is not only politically but also morally condemnable. Notwithstanding, a disagreement remains: is terrorism only linked to infra-national groups or might it sometimes be connected to state actions, such as the bombing of a city? In fact, is there such a thing as state terrorism? There is a huge ideological debate over this issue.
Since George W. Bush made the war on terror the bedrock of his international policy, one sometimes has the feeling of being a helpless witness to a nightmare scenario. If the goal ― to fight terror ― is widely accepted, the tools used to reach it are heavily contested.
According to Bush, the war on terror recalls the story of a drunk man who has lost his keys but prefers to search for them where there is some light and not where he is supposed to have lost them. The point is that it is easier to look for something you can see, which is probably more convenient but not more efficient. The U.S. policy shows a refusal to tackle the political roots of terror and a tendency to favor military options. Bush probably thought that it was easier to increase military expenditures than cope with the political roots of terror. But for sure he has as little chance to win this kind of war as the drunk man has of finding his keys.
Who could seriously consider that the war in Iraq was an appropriate answer to the 9-11 attacks? Who could still claim that this war was an effective way to fight terrorism? On the other hand, who could deny that it has fueled more terrorism? Who is still not convinced that it was very dangerous to change the strategic and political map of the Middle East before having solved, even partly, the Israeli-Palestinian conflict?
Unfortunately it was not President Bush’s only mistake. Not only has he added fuel to the fire he pretended to extinguish, but he has also given ammunition to his foes.
According to him, terrorists hate democracy, while he pretends to protect it. But in that case, why is he damaging its very principles? From the civil rights restrictions in the United States (beginning with the Patriot Act) to the ultimate shame of Abu Ghraib and Guantanamo, Bush added moral failure to the strategic one. And the moral failure exacerbated the strategic disaster.
Illegal imprisonments, excessive repression, bombings of civilians, torture and daily humiliations are strong incentives that turn peaceful people into terrorists.
Respect of legal procedures and international law is becoming a geopolitical issue. One must admit that even if there is a difference between democratic and non-democratic regimes, there is another between one which respects its own principles and that of others. It is wrong to assert that fighting terrorism is not possible if bound by respect of law and human rights. To the contrary, efficiency requires sticking to it.
European and Asian allies must support the goal of fighting terrorism, because their own security depends on it. But they should put ahead human rights and respect of international law and dare to express to Washington their disagreement when they think that U.S. policy is on the wrong track.
Democracies must be spotless. Being exemplary is the only way for democracy to show its strength.

*The writer is director of the Institute for International and Strategic Relations in Paris.