A master carpenter at work on decoration for a sideboard. [JoongAng Ilbo]

Aside from food, there’s probably nothing that better encapsulates the taste, sensibility and lifestyle of a people than the furniture they use.
Wooden furniture from Korea is often compared to white porcelain of the Joseon Dynasty. They both have a subtle beauty and elegant shape. But there are also practical and scientific principles inherent in the furniture designed for traditional Korean homes.
The first factor was ondol, or traditional underfloor heating, which prevented cold in the winter and prompted people to stay close to the floor. That led to traditional Korean furniture being built low to the ground, in sharp contrast to Chinese or European furniture which is usually much taller and heavier to suit larger rooms and higher ceilings.
Even cabinets and drawers weren’t taller than a standing man so that a person sitting on the floor wouldn’t be overwhelmed by their size and weight.
Indeed there was no notion of a standard size for Korean furniture. It varies in shape and dimension because much of it was tailored to fit the size of the room and taste of each owner. And because clothes were folded and stored in cabinets there was less need for tall furniture where fabrics could be hung.
The balance of aesthetics and function in traditional Korean furniture is striking.

Who else would have thought of inventing folding screens as temporary interior partitions to protect against monsoon storms in early summer and create an intimate space to drink tea or read while one appreciates a landscape painting?
Or what about the holes and grooves used to make wooden joints, instead of metal nails, as a way to stress the natural beauty of wood?
“There is so much care and attention put into little details of the furniture,” says Sohn Geun-bae, the owner of Jangan Antique. “The simplicity of their lines and meticulous proportions amaze critics and contemporary designers.”
Korean furniture is generally noted for the quality of its wood. Up to 70 percent of Korea’s landmass consists of mountains, offering an abundant resource for carpentry. The varieties of tree found in Korea include pine, elm and mountain ash. For some of the high-end products persimmon wood is used to create an elaborate surface in orange and black. Then, of course, there is bamboo, which is woven to form chairs and tables.
It’s easy to spot the elements that differentiate Korean furniture from Chinese or Japanese. The designs are often simple, featuring the natural patterns of the wood. Ornaments are reduced to a minimum, though inlays of mother-of-pearl or lacquer were applied on the surface as a status symbol.
Most Korean furniture found in antique markets today is from the late Joseon Dynasty. That was the period when master carpenters began to work independently without being regulated by royal authorities, producing custom-made furniture for the homes of middle- or upper-class families.
Given the conservative nature of the times, it’s hard to imagine how artisans of the period came up with so many inventive ideas that integrate function and ergonomic structure, but they did.
To prevent swelling or other distortions caused by humidity, the wood was divided by type and used for different parts of each piece.
The surfaces were painted with lacquer to seal the wood, then coated with perilla seeds or walnut oil to bring out the natural texture of the wood.
Traditional Korean furniture is divided into three types: furniture used for bedrooms, living rooms or kitchens.
Based on Confucian ideas, rooms were strictly divided into sarangbang (the men’s quarters) and anbang (women’s quarters.) Among aristocrats the separation was strictly maintained. One Confucian text states that “a man would not enter a woman’s quarter unless he was needed, while a woman would not leave her room unless she was requested to do so.” 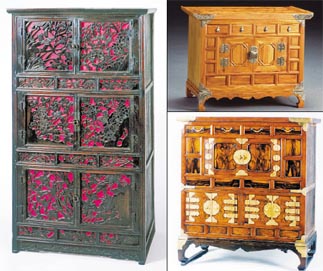 Clockwise from left; A three-stack cabinet; a typical Korean drawer; Wongangjang, a cabinet for a woman’s quarters. [JoongAng Ilbo]

“Sarangbang,” which unlike its modern literal translation of “love room,” was a type of office where men studied and greeted guests.
The design of Korean furniture for the men’s quarters, which was often set up for scholars and aristocrats, was noted for their refined and humble structure.
Hong Man-seon (1643-1715), the author of “The Forest Economy” once wrote that rooms for scholars are “good enough with a work of calligraphy, a painting of flowers and birds or a small landscape painting. Vivid colors are not better than simple ink monochromes. In cabinets do not stack indecent books. A tall pile of books could also create a feeling of vulgarity. Do not have any carvings on your desk or tables. Avoid metalwork or red colors. Instead choose furniture that emphasises the natural grain of the wood.”
For scholars the texture of the wood was carefully chosen so as to have no gloss, preferably from pine or gingko trees. Tables or desks made from Zelkova trees were avoided, as strong wooden patterns were believed to diminish the scholar’s concentration.
Common furniture for men’s quarters included tables, drawers, ashtrays, a brush rack and wooden pillow. Cabinets were highly regarded, as they stored precious books.
Tables and chairs were rarely used, however, with the exception of palaces, government organizations or offices of powerful scholars.
Bedrooms for a women’s quarter were the shelter of the woman of the house. The design of furniture for bedrooms was based on the surfaces of the wood with ornate textures employed in cabinets, drawers and dressing tables, which were often inlaid with mother of pearl. The engravings on cabinets often stood for symbols to bring the family prosperity, longevity or fertility.
But there were also rare items in women’s bedrooms such as money boxes with separate compartments for coins and paper money, which reveal the economic power that women wielded in Korean families.

The kitchen furniture included rice chests and dining tables that were often made out of strong chunks of ginkgo or pine that were resistant to cracks or scratches. Unfortunately there are few documents available regarding traditional bedroom and kitchen furniture in Korea.
In the book “Traditional Korean Wooden Furniture” Kim Samdaeja explains that “women during the Joseon dynasty were forbidden from producing written material that would be read by others, even though some were literate.” This restriction has created great difficulties when it comes to documenting the traditions and history of Korean furniture ― Men did not write about furniture and women were forbidden to do so.

For those who want to get a sense of traditional furniture there are several places to go. Insa-dong is the easiest option. It has a range of shops selling antique furniture. Dapsimni Antique Market, which is considered an open museum of traditional arts, is also an ideal destination where shopping merges with arts and crafts. Prices vary from 5,000 won ($5.46) for a small lamp to 500,000 won for sliding paper doors framed in wood. There are about 147 shops. Since the market opened in two buildings the mid-1980s the scarcity of originals and an increase in Chinese reproductions have driven away many customers, but it still offers a fair number of original antiques. Popular items include yakjang (medicine cabinets), bandaji (chests), hwajangdae (dressing tables) and sang (tea tables), which cost between 150,000 and 400,000 won.