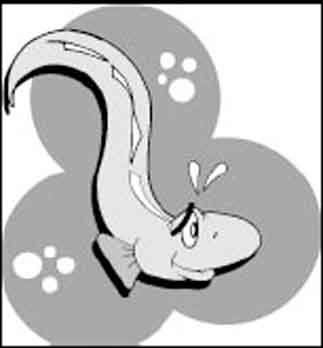 Just as Koreans eat ginseng chicken soup in the summer as a stamina food, so the Japanese eat eel. They think the eel’s tender and delicious flesh covered with a glossy soy sauce will restore appetite and vitality in the midst of sweltering heat. As eel are rich in protein and vitamin B, the Japanese tradition has a good nutritional foundation.
Japanese people also enjoy eel most on a particular day, just as ginseng chicken soup restaurants in Korea have their peak on the summer day known as Bok. The day that eel restaurants heave with crowds packed wall-to-wall is the day of ox, or doyo no ushi no hi. It is usually one of the days between late July and early August. This year it is July 30.
In the past, because of prohibitive price of eel, ordinary people often could not eat it unless they were the guest of somebody else. In the movie serial “Men are Not Happy,” directed by Yamada Yoji, the main character, Dorajiro, who had quarreled with relatives and had a face clouded with anger, suddenly breaks into a beaming smile when someone says “let’s eat eel, it’s been long since we had it.” This is one of the most memorable scenes in the entire series which had 48 episodes.
Ordinary Japanese people have been able to enjoy eels for the last 20 years, ever since the Taiwanese and Chinese started to raise them in fish factories and began exporting massive amounts.
It is expected that this year the price of eel will soar and consumption will plummet. This is because the European Union has put a brake on the practice by which China buys eel fry from Europe and sells them to Japan, based on a Washington agreement on the trade of animals near extinction. There was also an announcement that harmful ingredients have been found in Chinese eel.
In Japan, there is a colloquial expression unagi-nobori. It refers to the power of eel as it climbs steep rocks to get back to freshwater after having sprayed eggs in the sea. The expression is used when stock or commodity prices, a person’s popularity or rank rise steeply. For instance, it would have been a good expression to use when Korea’s Composite Stock Price Index broke through 2,000 points last week, although the Kospi has declined since then.
The same goes for Japanese Prime Minister Abe Shinzo’s approval rating, who became the youngest prime minister in Japanese history backed by unagi-nobori popularity.
It is easy to be intoxicated with the joy of unagi-nobori, but one most always be humble and remember the inescapable truth that what goes up, must come down.