Getting mashed in Pyeonchang with Samgutgui and a tuber fest

Getting mashed in Pyeonchang with Samgutgui and a tuber fest 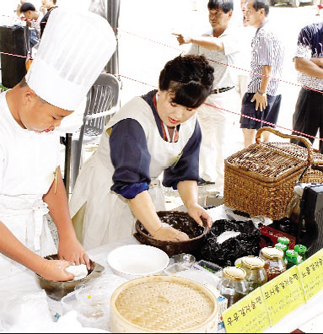 A potato cooking competition during the 2006 Pyeonchang spud festival. [JoongAngIlbo]

For potato lovers the festival of a life time is just around the corner. Gangwon is holding its spud festival from Aug. 8 to 12 in Pyeongchang County, Doam-myeon Hoenggyeri. The festival site will be located near the Yongpyeong Ski Resort.
Gangwon produced 25.9 percent of the nation’s potatoes last year.
The region also had the highest average yield on the Peninsula with 3,092 kilograms of tuber per 10 acres between 2001 and 2005. During the same period the nationwide average was 2,617 kilograms per 10 acres with Jeju Island at 2,093.
Celebrating its 11th anniversary, the festival will open with folk performances, a marching band and a cooking contest.
A popular activity will be digging up potatoes from a field and for those hoping to improve their beauty, there is an opportunity to use a variety of skin-care products made from potatoes.
The festival will offer lots of potato samgutgui, a dish with meat and vegetables popular in many Korean farming villages. A hole is dug and heated stones are inserted, to be covered with dry straw and dirt. Water is poured on the stones, which emit steam, cooking the samgutgui.
There are competitive events including stacking up potatoes in a limited time, a potato-peeling competition and test of strength in which competitors hold sacks of potatoes over their heads.
For those who are confident in the kitchen there will be an opportunity to show off their skills in a potato cooking contest.
There are also events that do not involve spuds such as a family singing competition. The contestants participating in this event must be a family of more than three members. The family that won the 2005 competition will be giving a ceremonial performance.
Additionally, on the second day, visitors will have the opportunity to listen to different Gangwon dialects such as Gangneung, Donghae, Samcheok and Pyeongchang when a dialect competition takes place.
For more information call (033)249-2647, 3564, 2648 or 2642.