New pop has an agenda to unite art with nature

New pop has an agenda to unite art with nature 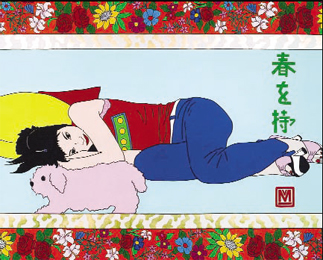 A blue-walled hall of flowers in outrageous colors. Penguins drenched in pink. Grayish pills spilled on a white canvas with the word “fragile” superimposed in the middle. These works, at times garish, but always attention-grabbing, are by contemporary artists from seven different countries who will be showcased in an exhibition titled “Les Nouveaux Pop” at the SOMA Museum of Art from mid-July to late September.
Presented by the Seoul Olympic Sports Promotion Foundation (SOSFO), the collection features works from esteemed French pop nouveau artist Philippe Huart, as well as representative paintings from Argentinean master Cecilia Cubarle. Five others, including the artists’ group Cracking Art, Xiao Fan and William Sweetlove, explore social issues through a variety of mediums, including sculpture and still life on canvas. The exhibition covers two floors and a total of six rooms.

As one moves through the first few rooms, the motif of destructive consumerism is everywhere. Antonio Pascale, in particular, fills the first room with acrylic paintings on canvas. Crumpled snack wrappers draw the eye to unexpected scenes of disintegration like a burning van.
A slow transition from inanimate objects to people occurs in the next few rooms. Huart, for example, marries esoteric ideas such as “truth and consequences” with stark images such as handcuffs and a revolver. Setting the items against an orange and black background forces the criminal objects into the foreground. Other artists in subsequent rooms spotlight the human form.
Pop art is a movement that developed in France and the United States during the mid- twentieth century that heralded the end of the distinction between “high art” and “low art.” As a reaction against prior schools, including Abstract Expressionism, artists emphasized everyday objects, drawing inspiration from cartoons, advertisements and the like to embrace informality.
“Les Nouveaux Pop” introduces the audience to the influence of European Pop art, according to its organizers. 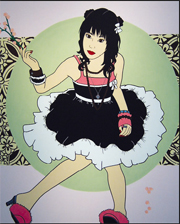 The exhibit differs from the philosophy espoused by its predecessors by moving away from commercialism to unite art with the “natural world.” 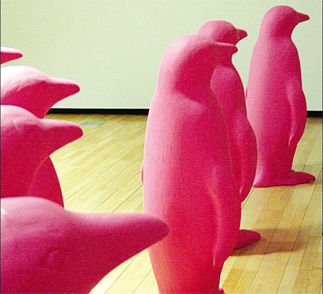 Vinyl on canvas, both by Maria Manuela. Provided by the organizers