Stealing moments in time, not souls

Stealing moments in time, not souls 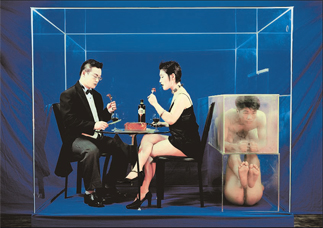 Atta Kim’s “The Museum Project” series. Provided by the organizers

About a century ago, during the Joseon Dynasty, when the camera obscura was first introduced, Koreans believed that cameras were occult objects which could steal their souls.
Now, cameras have become an inseparable part of Korean life and a passion that inspired the creation of the Dong-gang Photography Festival in Yeongwol County, Gangwon.
Opening tomorrow in this small town, a two-hour car ride from Seoul, the festival is now in its sixth year and organizers claim that this year’s collection is the best ever with the greatest variety of styles.
About 50 professional and several dozen amateur photographers will present their works in venues around the town until Aug. 22.
The festival offers a wide spectrum of photographs, from pictures of Seoul’s cityscape 100 years ago by Australian photographer George Rose to avant-garde works by contemporary artists.
The Dong River region is best known for its scenic beauty with outstanding rivers and mountains, which is another reason why Shin Eun-kyung, the festival’s organizer, invites viewers with such enthusiasm.
Yeongwol County is also home to the “one and only photography museum in Korea,” according Shin. She calls the festival an “exhibition without a roof,” because photographs will be on display almost everywhere, including the walls of buildings in town and the festival venue itself.
Shin says that a must-see at the festival is the feature on Atta Kim, a Korean photographer who is enjoying international acclaim after successful exhibitions in New York. Kim is known for his innovative works that carry a philosophical message. Kim will be given an award by the festival and many works such as “Deconstruction,” “The Museum Project” and “On Air” series will be available at the Dong-gang Photograph Museum. “The Museum Project” attracted attention because of its focus on sex, violence and ideology. Human beings are pictured in glass boxes in variety of settings. Kim is also giving a lecture on his work this Saturday. 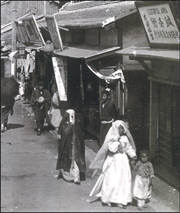 George Rose’s photograph of Seoul in the early 20th century.

Another acclaimed photographer, Koo Bohn-chang, presents a special exhibition featuring “critical moments in daily routines,” with several contemporary artists.
Features at other venues include portraits of Yeongwol County natives at work.
The festival also offers photographs by local artists, such as portraits of an aged couple enjoying an uneventful afternoon and cows enjoying their food in a manger.
Photography is not the only reason to drive two hours to this city.
There will be Latin jazz concerts tomorrow and Saturday and free movie screenings 8 p.m. from every night from Aug. 4 to Aug. 12, including “Pirates of the Caribbean: Dead Man’s Chest” this Saturday and “Roman Holiday” next Thursday.