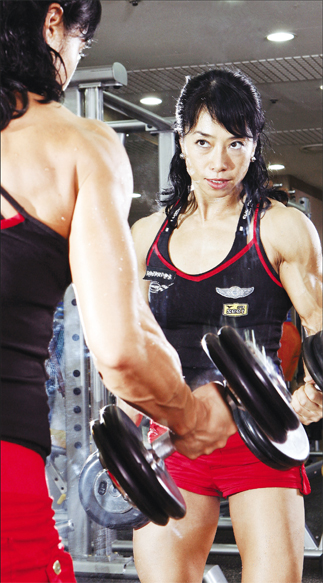 Bodybuilder Yu Mi-hee training at a gym near Seoul. By Ahn Yoon-soo

While most new mothers struggle to shed weight after their pregnancy, Yu Mi-hee took a different direction, and began to train as a bodybuilder.
After 11 years of training, Yu, a mother of two, won the Miss Korea bodybuilding crown as well as the coveted couple’s title (paired with her husband) during national competitions this year.
“I was as pale as snow and really overweight, almost 80 kilograms (176 pounds), when I started back in 1996,” she said as she crossed her spectacularly toned, tanned legs.
She had just had her first child and with her husband’s encouragement, decided to challenge herself by regaining control of her body.
Yu began work as an aerobics instructor when she was 20.
“After the birth, I knew I had gained weight,” she said. “As I was still running gym classes, I had no choice but to lose the weight so that the gym members could be inspired by my example.”
Yu decided to run for the Miss Korea title last year.
“Compared to 12 months ago my body has improved quite a bit,” she said. “It was quite ironic because I beat out Kim Ji-eun [who came second place in Yu’s weight group], who was my inspiration for getting into the competition in the first place.
The JoongAng Daily met Yu at a local gym in Gwangmyeong, Gyeonggi where she works as a trainer and manager.
She was teaching a New Zealand native who works out in the gym and joked, “He is my English teacher,” as she expressed enthusiasm to learn more English to help her with international competitions.
“I sometimes push myself too hard but it’s just my nature. I think that is why I like being a bodybuilder,” she said. “Every year, you have to improve your body. If you become lazy during workouts or eat something you shouldn’t, it shows on your body. Every single morsel is revealed.”
After a few arm routines, her Kiwi pupil started to sweat and turn red. “It’s great to see her go after what she wants,” he said. “She looks fantastic. I wish I had the kind of discipline she demonstrates every day.”
Although bodybuilding, especially for females, is not common in Korea, interest is growing.
“In the new millennium, the public has become more body-conscious with the whole ‘well-being’ boom and the desire to have better looking bodies,” said Kim Dong-hyeon, the head of the women’s division at the Korea Bodybuilding Federation.
He added that even with this increased interest, the majority of the Korean public still view the physical form of bodybuilders as undesirable. “Especially for women bodybuilders, the public perception can be harsh.”
Yu scowled a bit as she talked about comments she gets on the Internet.
“One person wrote, ‘What is the difference between a transgendered person and a female bodybuilders?’ It’s fine if they have their opinions about my body but the comments are often so ignorant and vulgar.”
After a second or two of visible irritation, Yu became more composed. Her beautiful smile became radiant again. “It doesn’t matter,” she said.
Apart from public disapprobation, money is also an obstacle.
Women bodybuilders are not yet members of the National Athletic Meet, which means awards given during national and regional competitions do not come with compensation, restricting the sport’s development.
Male bodybuilders, on the other hand, are National Meet members.
“With the additional fees for tanning, buying oil, as well as nutritional supplements, it is hard to survive with just bodybuilding,” said Yu. “You must have a day job.”
“Because of the financial difficulties, women often drop out after three or four years,” said Kim.
As a result, the number of female bodybuilders has remained around the same since 1995,when professional competitions for women first began.
The anatomical differences between men and women are another barrier.
“Women have to work nine to ten times harder than men to form muscles,” said Yun. “During the season, I work out every day for three to four hours and stay on a strict diet of unseasoned chicken breasts, egg whites, potatoes, asparagus, sweet potatoes and nutritional supplements. This diet also adds to the cost of being a bodybuilder.”
Kim explains that, overall, Asians are at a disadvantage in professional world competitions. “We have shorter legs and a smaller bone structure,” he said. “That can make it to difficult to show off muscle tone.”
At the moment, Korea only holds amateur bodybuilding competitions. In the bodybuilding world, professional competition means athletes tend to take steroids and, on occasion, the judges turn a blind eye ― while amateur competitions are strictly opposed to drug use and enforce a universal ban.
“I personally do not take steroids because I’m afraid of the side effects,” said Yun. “Since I have a family and children, I tend to be extra careful about that kind of thing.”
She added that she doesn’t judge other bodybuilders who decide to take steroids to enhance their performance.
“It’s a tough sport,” she said, “and as people get more experience in the field, they get more ambitious about constantly improving their appearance.”
“The Korea Bodybuilding Federation is contemplating whether to have both professional and amateur competitions like other countries, but we need sponsors for that,” said Kim.
When asked why she is attracted to the sport, Yu said, “I feel in control of myself when I’m training to compete.”
Lifting dumbbells the size of newborn babies next to a huge male trainer with rippling biceps, she went over to the trainer and gave tips on his position. Afterwards, she continued. “Every muscle on my body is a result of the effort I put into making it. I have a meal plan for most months of the year. But when I’m training, I feel like I can achieve anything, if I put my mind to it.”