Music with the scent of nature smells a lot like love

Music with the scent of nature smells a lot like love 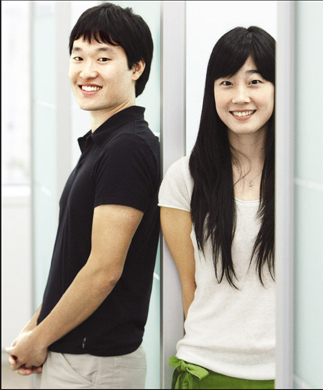 Chung Seon has pursued a different path to his father’s, the internationally renowned composer Jung Myong-hoon. But in essence, they seem connected because both have devoted their careers to making music that touches others.
Twenty-five year-old Chung is a jazz musician. He majored in jazz guitar at the New School University, which is known for its jazz program. Since last year, he has been involved in organizing the Incheon Jazz Festival. For this year’s concert, he will feature in a 17-man jazz orchestra.
Chung said that his father also likes jazz and was supportive of his decision to focus on the genre. “He always attended my concerts and said, ‘Whether it’s classical music or jazz, the good ones will always shine through’,” he said.
It was after Chung got a taste for jazz improvisation that he was completely hooked. “Classic music is too old,” he added.
“To be a classical musician, you have to follow the rules. In jazz one is free to choose. I like classical music, but my experimental side is more suited for to jazz improvisations,” he said.
“You can express yourself in a direct manner through jazz. Also, you can mix genres of music,” he added.
He plays the guitar with his fingers, not guitar picks, thus allowing a softer, more vulnerable sound to come through.
“Chung’s performance sounds like a naive child who is shy about revealing himself,” said guitarist Han Sang-won.
Chung has invited international jazz artists to the Incheon Jazz Festival. Featured guests include Brazilian guitarist Egberto Gismonti, bassist Charlie Haden, who has received two Grammy Awards, and Cuban pianist Gonzalo Rubalcaba.
“Koreans seldom listen to music that is unfamiliar. Through this concert, I want to introduce some talented jazz musicians who are unknown to Koreans.”
His supportive partner is Sin Ye-won, a 26-year-old jazz vocalist. She also graduated from the New School and sings for saxophonist Billy Harper.
Sin first appeared on the music scene in 2002, with a song titled “Byeol.” Back then she was only a junior student at Dongduk Women’s University. The song was popular but her next release was a blockbuster.
“Yunanhui,” which she sang with Korean pop singer Kim Jin-pyo, became a big hit.
However, she decided to sing jazz after she was introduced to it and bossa nova by pianist Kim Gwang-min.
“Bossa nova deeply touched me,” she said. “I found it was exactly the right music for me. I left for New York to study it. That was 2005.”
Sin Ye-won does double duty ― she performs bossa nova as a singer, and works in a variety of jazz modes as a composer.
Sin first met Chung at a concert held in 2001, where Chung performed with Han Sang-won and Ham Chun-ho. At that time, Sin Ye-won was in the chorus for their performance.
Now the couple has what seems like the ideal combination, with both getting inspiration from nature. “I am inspired by sunrises, sunsets, the sea and flowers. My sentimental melodies will have the scent of nature,” said Chung. “Sin Ye-won also composed songs about her feelings as she walked around New York’s Central Park.”
They also share hobbies, such as mountain climbing and gardening. They seem to have something more than music.
“You can see how we are in harmony with each other. You think there’s something secret between us, but I won’t talk about that,” said Sin before laughing.