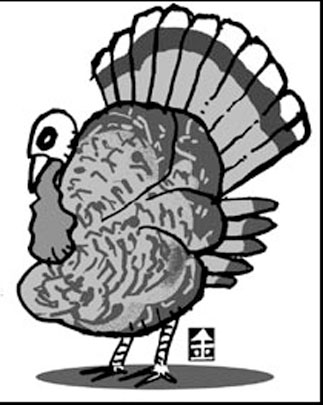 This is a story about the Bedouins from Thomas Friedman’s book, “From Beirut to Jerusalem.”
An old man raised a turkey near his camp. One day, somebody stole his turkey. The man told his sons to go find it. But they didn’t bother, because they didn’t think the turkey was very valuable. Several weeks later a camel was stolen. When the sons asked their father what they should do, he replied, “Go find my turkey.” Another week later, a horse was stolen, and the old man said, “Go find my turkey.” Several weeks later, his daughter was raped. He said: “It is all because of the turkey. After stealing the turkey, they learned nobody would stop them.”
In the film “Ransom,” Mel Gibson loses his son to kidnappers who demand a $2 million ransom. However, Mel says in a television interview they will never get a single penny. Instead, he offers the $2 million as a reward for the heads of kidnappers. When they snatch his wife and assault her, he raises the reward to $4 million. He loves his son more than anyone else, but his wife blames him when their son dies.
A devious mind knows no courtesy. People will take advantage of you when you do not stop them and they will attempt to steal more from you.
Having something stolen is different from making a voluntary donation. Thieves mistakenly believe they are legitimately entitled to keep what they have stolen and repeat the same mischief, just as dolphins and pet mice tamed by bait repeat the same actions.
Many countries take an adamant position against terrorists, saying they will never negotiate with them because doing so puts innocent people in danger. The Taliban demanded an exchange of the Korean captives with the Taliban prisoners in Afghanistan because they received a similar deal in return for an Italian journalist in March.
Recently, kidnappers have frequently targeted Koreans. Last year in Nigeria, employees of Daewoo Construction and the Korea Gas Agency were kidnapped. In January and May of this year, it was Daewoo Construction employees. On the sea off Somalia, Korean mariners were abducted in May. The kidnappers were the same pirates who received money in 117 days after snatching a Korean ship. They called one of the mariners who had been released at that time to negotiate. In all seriousness, they are having fun kidnapping Koreans.
You have to speak to the devil if necessary. Yet if you tolerate the vile criminals who hijack innocent lives, you encourage them to do it again. Hence, Friedman said in his book, if you are seen as a sheep in a world full of lonely wolves, you will be in trouble.