Phobias: Feel the fear but do it anyway

Phobias: Feel the fear but do it anyway 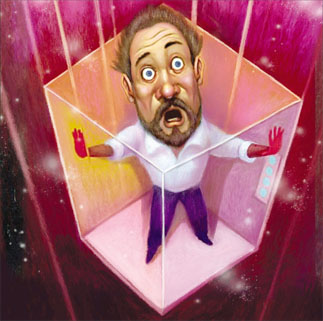 Three years ago, Park Sang-hwi, 26, was in a dreadful situation. Waiting for her departure from Gimpo Airport, she was trembling and sweating. She took a sleeping tablet right before boarding, but her fear of flying was so intense that she felt even dizzier. When the plane was about to take off, she was unable to breathe.
In the end, she ran off the flight and took a five-hour ferry boat ride from Mokpo to Jeju Island instead of the one-hour flight.
Jung Doo-a, 23, also shares that fear. She refuses to ride escalators. Mountain climbing and carnival rides are the last things she would do in her life.
Park and Jung suffer from acrophobia, the fear of heights, and they are not alone.
According to a recent survey conducted by a public opinion institution, Real Meter, six of ten adults suffer from a phobia.
“A phobia is a type of anxiety disorder and a strong fear or aversion to a specific thing or situation,” said Yook Sung-pil, a psychology professor at Korea University and public relations director of the Korean Society of Clinical Psychology. “It is an unseen force that terrifies people and paralyzes their mind and body,” he said.
The word phobia originates from the Greek word phobos, meaning fear. In Greek mythology, Phobos is the son of Ares, the war god. The Greek poet Hesiod wrote in “Shield of Herakles:” “His [Phobos’s] mouth was full of teeth in a white row, fearsome and daunting.”
Like the fearful image of Phobos, phobias are associated with a feeling of panic, dread and horror.
Fear is important for human beings to experience because it acts as a safeguard. In healthy doses, fear makes people cautious. “But there are irrational fears, which keep you from exploring the world,” Yook said. “People with phobias irrationally interpret a fact or a situation.”
As Korea developed economically, residents started to recognize phobias as disorders after learning more about mental health issues.
Causes of phobias differ. One person with musophobia, a fear of mice and rats, might be more horrified by a small furry animal than the threat of a nuclear bomb.
Though the causes of fear are subjective, fear and anxiety are due to both genetic and environmental reasons.
“Social phobia, or social anxiety disorder, is caused by the malfunction of neurotransmitters [sense organs] in the brain,” Yook said. Traumatic events also trigger the malfunction.
Humiliating social experiences, such as being rejected by friends or getting embarrassed in public, may lead to low self-esteem or a feeling of inferiority.
In addition to social phobias, the other two types are specific phobias and agoraphobia, the fear of public places.
Specific phobia is most common and entails people’s fear of certain animals, beings or situations. This variant is mainly genetic.
Chae Dong Yoon, 23, has acrophobia, a specific phobia probably learned from his father.
“As a young child, I saw my father reluctant to ride the elevator,” said Chae. “It made me think that elevators [or heights] are harmful.”
Specific phobias can be also acquired by a traumatic event.
Though she braved a ferry ride, Park Sang-hwi also suffers from a fear of water, aquaphobia. It started when she almost drowned in a public bath. Reluctant to recall that trauma, she said, “water makes me sick.”
Even though she realizes that water may pose no imminent threat, she avoids activity in the ocean or rivers.
A businessman, who asked to remain anonymous, goes on domestic business trips by taking the KTX bullet train. An earlier event triggered fear so he always rides the train.
“I lost my mother-in-law in a plane crash,” he said. “Since then, I’ve had aerophobia.”
Lee Sang-min, the head of the Institute for Fear of Flying in Korea, said the fear of flying can be cured. 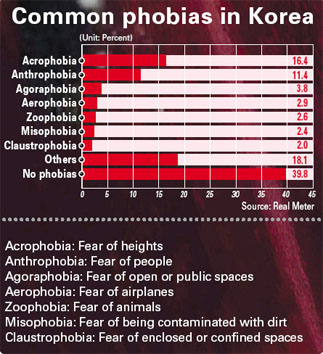 According to the International Civil Aviation Organization, in 2006 there were 25 million flights around the world, with 2.1 billion travelers. Accidents occurred 13 times, causing 755 deaths.
The statistical data shows that five accidents occur in 10 million flights. “Compared to cars, airplanes are ten to a hundred times safer,” Lee said.
Despite the fact that there is a low possibility of a crash, the number of people with aerophobia is increasing.
“It is due to the unpleasant emotional feeling,” said Lee. “People imagine what could happen, combined with fear of turbulence and being locked up in a small space [claustrophobia].”
The international organization reports that there is an annual loss of $1.6 billion from people with aerophobia. Losses from fearful flyers amounts to nine percent of total sales.
“A person with a phobia either tries to avoid the situation that triggers fear or endures it with great anxiety and distress,” said Yook. He cited the example of Blaise Pascal, a mathematician and chemist who suffered from agoraphobia and avoided the situation by refusing to join scholarly meetings in public areas. Instead, he invited other mathematicians into his own room for discussions.
“Most patients know that their excessive fear is unreasonable,” said Yook. “People are often ashamed or embarrassed about their symptoms and that is why more people try to avoid the fear rather than endure it.”
Jung’s friends find her fear unreasonable.
Said Park: “My friends keep persuading me that it is O.K. to take airplanes and that nothing will happen.” Even so, she still struggles.
Park even took a ferry to Papua New Guinea from Korea. It took a week. She tried to overcome the fear by visiting a psychiatrist and receivomh counseling, but the treatment didn’t get rid of the fear.
“Phobias interfere with social life,” Yook said. “But they can be cured.”
Of various treatments, behavior therapy and cognitive therapy are known to be most effective.
Behavior therapy allows patients to gain control over unwanted fears. They learn to cope with terrifying situations through gradual exposure. They are taught to master the fear through relaxation, breathing control or other anxiety-reducing strategies.
Cognitive therapy allows patients to combat unproductive and harmful thoughts as they learn to differentiate realistic and unrealistic danger.
“A combination of both behavior and cognitive therapy is best,” said Yook. This combination is called cognitive behavior therapy.
Other treatments include anti-anxiety medication such as anxiolytics, antidepressants or beta-blockers.
Chae has gradually overcome acrophobia through self-behavior therapy. He joined a rock climbing club and started slowly, first climbing sideways and gradually moving upwards. To overcome aerophobia, the Institute for Fear of Flying in Korea offers programs. Clients are educated about airplane operation, for example.
So far, of 99 clients who participated in the program, 76 percent subsequently traveled by air more than once within a three-month period. “I’ve seen a patient who traveled 30 times in three months,” said Lee. “Phobias can be cured, if you put in some effort.”