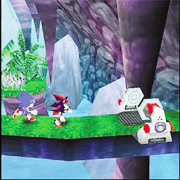 Back in the early ’90s, Sonic the Hedgehog, a beloved game character, was launched with a revolutionary arcade console. Instead of joysticks and buttons there was a sizeable ball in the middle of the platform and the character started to roll around on tracks when the ball was spun. It was physically demanding and controlling the direction of the hedgehog wasn’t easy, so many gamers’ lost interest. However, it was entertaining. Sonic has been around since gaming prehistory but “Sonic Rivals,” it’s new product for the Playstation Portable, doesn’t have much of an entertainment factor. It’s mildly enjoyable but not addictive.
Sonic Rival features a fast, cutting-edge race between characters who zoom along tracks while dodging obstacles and picking up golden rings. The graphics mix 2 and 3D.
The biggest problem is the level of the game. It is very difficult. Sonic or any of the other characters available fall into death traps very easily, which can be really annoying.
The frequent deaths only diminish the entertainment value of the game and the player ends up racing the same track over and over again until he gets the hang of it.
The real fun of Sonic Rivals is when the player gets to fight with boss-level enemies.
That’s the only time when Sonic or any of the other characters don’t have to race on tracks. Sonic Rivals should have made the play a bit easier and less annoying while adding something that is a revolutionary departure from past Sonic games. One suggestion would probably be adding a miniature play ball for the portable version.
Genre: Race
Platform: PSP
Publisher: Sega
Rating:   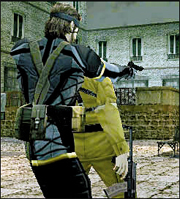 Snake Easter and his tough attitude are back and this time the action appears on the Playstation Portable for the first time in the long series. “Metal Gear Solid: Portable Ops” is an excellent game for both long-time die-hard Metal Gear Solid fans and first timers. The developer Kojima has done an excellent job of converting the PS2 game to a portable platform. This time Snake is wanted dead by both the U.S. and Russian governments as well as a renegade FOX unit. Snake’s mission is to clear his name and stop the FOX unit creating a nuclear holocaust.
A distinctive new feature of Ops is that while in the past Snake was a loner infiltrating behind enemy lines, in the new game he can form a unit. Depending on the situation, players can choose the appropriate pack unit members such as a medic or an engineer. The members of Snake’s squad can be enemies who convert to his side. A die-hard fan need not worry ― the espionage action that made the series so famous is still a key element of the game.
As in any games there are some bugs and with Ops the slow artificial intelligence reaction is the biggest.
During the game players will find that Snake has a problem having his back completely against the wall or crouching down behind objects. Additionally some of the foot soldiers are slow in reacting against Snake’s attacks. Sometimes a whole bunch will be standing around in the open without using any stealth moves, even after one of them has been killed right by their side. That needs improvement. Portable Ops may be new on the PSP but it sure keeps entertainment alive for long-time fans and newcomers.