A dance for every myth and moment

A dance for every myth and moment 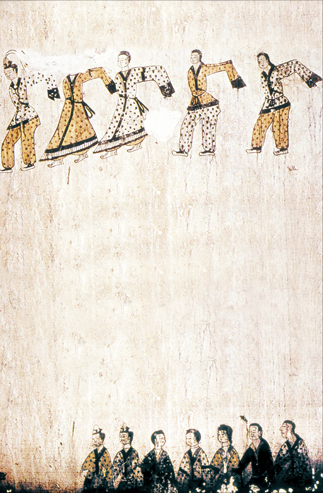 Muyongchong, A painting of dancers in long sleeves on the walls of a tomb dating back to the Goguryeo period. [JoongAng Ilbo]

Dance plays an intricate part in the history of any country, and Korea is no exception. Traditional dances can be seen almost everywhere, from stoic ceremonies to festivals large and small. The Korean dances many tourists have seen, such as nongak, where performers dance while playing traditional instruments such as the kkoenggarri, are just a few of the numerous Korean dances which have enchanted many through their uniquely sensitive movements.
Kim Malborg, author of “Korean Dance” and a professor at Ewha Womans University, said, “The root of Korean dance is closely related to our everyday lives. It was a collective act that took place at work, during rituals and ceremonies, and during festivities as a way to express the deepest desires of the human heart.”

A dancer performs seungmum. Although the dance is believed to have originated among Buddhist monks, the dance itself has no religious aspects. [JoongAng Ilbo]

Dance acted as way to alleviate the strains of daily labor, she said.
Kim Mae-ja, author of “Dance of Korea,” said Korean dance, like most dances around the world, originated from spiritual rituals.
She said Korean dance expresses solitude and han, a uniquely Korean word which can be translated as “abysmal grief.”
Korean dance follows a line that draws a circle, representing the embrace of the universe. To represent the heavens and Earth, the dancers’ feet are, at first, heavily planted on the ground. The dancer then moves slowly upward toward the heavens, lightly treading like a crane or a swan flying in the air.
According to Kim Malborg, the oldest historical mention of Korean dance can be found in the ancient Chinese text “San Gua Zhi,” from China’s Three Kingdoms period. Throughout history, Korean dances have been heavily influenced by Buddhism and Confucianism. China also had an influence, particularly during the Goryeo
Dynasty, which then carried over into the Joseon Dynasty.
Traditional Korean dances can be generalized into three categories, according to their purpose: royal court dances, religious ritual dances and folk dances.
Korean aristocratic dance is called jeongjae, referring to art intended only for the eyes of nobility that expresses loyalty and courtesy to the royal family. Kim Malborg said that the term “jeongjae” was established and widely used during the Joseon Dynasty. 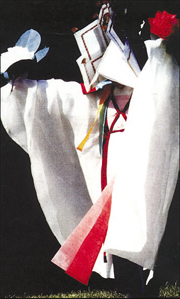 The nabichum, or butterfly dance

Compared with the other two types of dance, royal court dances emphasizes strictness the most because of its Confucianist influences. This impact can even be seen in the dancer’s outfits, which follow the five elements of Confucian belief. Wood, fire, earth, steel and water are represented with blue, red, yellow, white and grey. The colors also contain references to the seasons and the points of the compass. Blue indicates east and spring; red, south and summer; yellow, center; white, west and fall; and gray, north and winter.
The colors also symbolize virtue, civility, trust, righteousness and knowledge. Dancers performing the royal court dance focus on order and moderation, and must restrain from expressing their individuality or personal emotions. 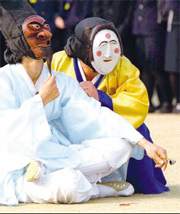 The talchum, or masked dance

Royal court dances consists of the geommu, or sword dance, the cheoyongmu, dance of the dragon king’s son (based on the story of a Silla king), and the mugo, or drum dance.
Ritual dance, the next type, can be divided into two smaller categories: a Buddhist dance performed during jongmyo, a rite that takes place in front of the ancestral shrine of the royal family, and ilmu, which translates as “line dance.” Ilmu is a line dance performed during the royal family’s ancestral rites. Kim Malborg said ilmu was first introduced from China during the Goryeo Dynasty.
The nabichum, or butterfly dance, is a ritual dance practiced by Buddhists. Its purpose is to discover “mercy, patience and Dharmic emptiness,” said Kim Malborg. The sleeves of the dancers are wide and long, resembling the wings of a butterfly. The distinctive feature of this dance is its slow movements. “The movements are all subdued and quiet and performed in an extremely small area less than one pace wide,” said Kim Malborg. The dances are performed by female monks to the sounds of Buddhist chanting. 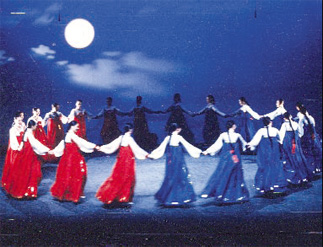 Unlike royal court dances, folk dances are based on the everyday lives of average Koreans. Therefore, Kim said, the movements are freer than those of the royal court dances and rely heavily on personal creativity.
Kim Malborg said that while the upper classes of the Silla and Goryeo dynasties were active in participating in artistic activities including dances, the scholastic class known as yangban during the Joseon Dynasty refused to rhythmically shake their bodies due to Confucian principles. Hence, professional dance troupes were formed and the dances were mostly performed during ceremonies and shamanistic rites rather than daily life.
Among the most well-known and popular folk dances in Korea is the salpuli, a dance derived from the shamanist practice of driving out evil spirits. Kim Malborg said the dance originates from shamans in the southern region and it was performed after a gut, or rite, signaling its final stage.
The dancer, usually dressed in white, uses white silk to symbolize the spirit.
The point of the dance is at first to restrain the body with sharp intensity, and then to let go in a powerful, typhoon-like blow. The movement of the feet has to be calm and steady, contrasting the upper body movement. The dance seems as if it is “taming the han from within and taming the air from without,” Kim Malborg said. “Scarf dances of China and Japan use a small square piece of cloth the size of a handkerchief or scarf, and shake it both ways.”
Another well-known folk dance, or seungmu, has no accurate tale of how it was passed on, but experts presume it was started by Buddhist monks. It employs long sleeves, the movement speeding up with powerful gestures. Although it looks very similar to the outfits worn during Buddhist dances, seungmu is not a religious performance but an expression of romance. It is said to be the most difficult folk dance to master.

Ganggangsulrae is a female group dance that is performed mostly on the Lunar New Year, when the moon is full. It is believed to have started during the Japanese invasion during the Joseon Dynasty. The female participants dance in circle that symbolizes the full moon, praying for a good harvest with the help of the moon’s healing power.
A more widely known folk dance is nongak, which is assumed to have been started by farmers, as the name literally means “music played by farmers.”
While the other dances mentioned above are rarely seen nowadays, nongak is performed at protests, major events and folk museums. It is performed to encourage farmers in their toil, bring a good harvest and drive away evil spirits.
Other famous folk dances include talchum, or masked dance, which has a strong theatrical element because it also acts as a social and political satire.