Haunted by the death of a high school girl

Haunted by the death of a high school girl 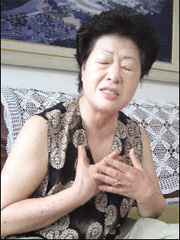 Ahn Sung-ryea still shudders when she recalls the Gwangju massacre. By Chun Su-jin

GWANGJU, South Jeolla ― On May 21, 1980, Ahn Sung-ryea, 43, a supervising nurse at the Christian Hospital here found herself amid a bloody pile of dead bodies and gunshot victims. She had been at the hospital for three days treating patients who filled almost every inch of space in the building.
Ahn had gone to nursing school in her teens, hoping to go to the United States and become a psychiatrist, but treating neuroses was the last thing on her mind as she walked past people with their heads smashed into two pieces, their eyes wide open after being beaten to death with gun butts.
“I felt guilty for being alive, instead of fighting to the death as they had,” said Ahn, who is now 70. “The soldiers were on a killing spree out there. You can’t just call it the suppression of a protest.”
But Ahn did not have time for self-recrimination. Her hospital was short of everything from blood and disinfectant to beds and bandages.
“The army isolated the city,” she said. “The phone lines were cut, so there was no way to ask for help.” Ahn and her fellow nurses, doctors and janitors were forced to take turns drawing blood from their own arms to supply desperately needed transfusions. Ahn was especially glad when a group of citizens arrived at to the hospital to donate blood. Park Geum-hui, then a high school student with braided hair, was one of them.
“Geum-hui looked at me and said, ‘Ma’am, I couldn’t just sit at home and study. There’s no use going to college if I cannot do anything about what’s happening in my own town,’ ― then she was gone,” Ahn recalled. About an hour later Park returned to the hospital as a mangled corpse. “Her blouse was soaked in blood and she was covered with dust,” Ahn said, her voice growing hoarse. “I collapsed and burst into tears. I cried out ‘The soldiers are evil!’ over and over. My heart was broken.”
When she returned home, her nurse’s uniform soaked in blood, she found that her husband, Myung Ro-geun, an English professor at Chonnam National University, had volunteered to be one of the citizens who would negotiate with the soldiers. However, his efforts were in vain. The movement ended after an armed assault on May 27.
For Ahn, however, the end of the movement was the start of a new fight. With Chun Doo Hwan officially taking the presidency, the regime denounced the Gwangju movement as an armed riot and tried to label the movement’s leaders, including Ahn’s husband, as North Korean spies who had plotted an uprising against the South Korean regime.
After her husband was detained, Ahn took the initiative and organized a group of families who shared her predicament. She then began to organize protests against the government. “I didn’t know I had such courage inside me. I was surprised to find myself making speeches and protesting against the regime,” Ahn recalled. She had married her husband because of their mutual love for William Wordsworth’s poetry and they had planned to emigrate to the United States to study. Now their mutual goal was to bring democracy to the nation. 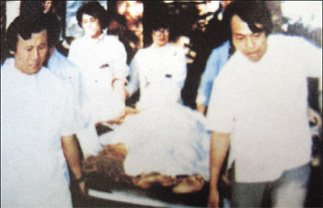 The Christian Hospital where she cared for victims. Provided by Ahn Sung-ryea

Ahn’s four children were drawn into the movement― all were detained and jailed for their protests against the Chun regime, which came to an end in 1988. Ahn then started a fight to free her children by leading the regional branch of Minkahyup, a group of people whose family members had been persecuted for their opposition to Chun. Myung Ji-won, Ahn’s third daughter, smiled and said, “Watching my parents’ fight, I had no other choice but to join their cause.”
Ahn rejoiced in 1988 when the National Assembly began hearings on the Gwangju massacre and then enacted a special law to compensate the victims. Her efforts were rewarded when she was elected to the Gwangju city council in 1991 ― she served until 2003. Her top priority during her time in office was to support the construction of a memorial site for those members of the democratization movement who were killed.
Ahn now runs a shelter, May Mothers’ House, for women who lost their families in 1980. The shelter sits close to Geumnam Street, the major site of many protests.
“I might forget the names of my children, but I will never ever forget the name of Chun Doo Hwan,” she said. “I wonder how long Chun Doo Hwan will live? I will be watching him until the day I die.”