The voice that galvanized an outraged city

The voice that galvanized an outraged city 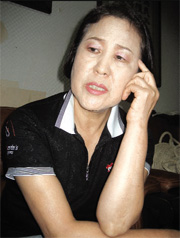 Jeon Ok-ju, left, became tearful as she described her role as a street orator for the 1980 democratization movement. By Chun Su-jin

SIHEUNG, Gyeonggi ― Jeon Ok-ju could have lived a quiet life as a dance teacher if she had followed the advice of a taxi driver on the afternoon of May 18, 1980.
He had refused to take her home to Gwangju from a nearby train station. “If you go there now, you’ll be killed by the soldiers,” the taxi driver screamed.
But his frantic advice only increased her determination to get to the city ― she couldn’t believe that Korean soldiers were killing their own people, men and women who were her neighbors.
Jeon was 31 in 1980 and had dreams of opening her own dance school. However, within hours she was grabbing a megaphone from a jeep to cry out, “Fellow citizens, join us. How can you sleep? The soldiers are killing our brothers and sisters. Let’s fight together until the end!”
Jeon knew nothing about making speeches, but the sight of student activists being beaten by soldiers on the afternoon of May 19 gave birth to a natural orator.
She started by giving water and kimbab (rolled rice) to injured students and decided to join their protest after seeing the dead body of a high school girl, her breasts slashed open by a bayonet.
“The soldiers claimed they were trying to catch North Korean spies,” Jeon said, tears welling up in her eyes. “But they were killing innocent citizens.”
On the evening of May 19 Jeon heard a voice calling out for volunteers to help get more citizens involved in the resistance. Jeon stepped forward.
Choi Yang-geun, then a college student, had the idea of using a megaphone. “Jeon was like a savior,” Choi recalled. “Without her, our rallies would have never been that big.”
“She was simply amazing,” said Chung Soo-man, president of the group that represents Gwangju’s bereaved families.
Chung joined the crowd of angry citizens after seeing his brother killed. He said that Jeon had something in her voice that kept people going. Decades later her voice is still resonant and high-toned.
Jeon now lives in the suburbs of Seoul. She recalled how the sight of death put iron in her soul.
“When you see blood, you simply lose your fear,” she said. “I could have died then and there anyway, so I had nothing to fear. I was just thinking that I should do everything I could do.”
Jeon’s body was not always as strong as her spirit. “I gave up at one point because my throat hurt so much from the tear gas and endless screaming,” Jeon recalled. “Then several citizens took me to a corner. They broke two raw eggs and pushed them into my mouth to soothe my throat.”
A sore throat was almost the least of her worries. At one point she was in a stationary car. She was eating a strawberry given to her by a middle-aged woman on the street. A bullet flew past her and killed the car’s driver. Jeon has not eaten strawberries since.
That day she moved some 30 bodies off the streets into a building, including the body of the car driver. 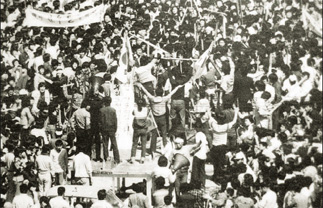 Jeon is pictured within the red circle in the photograph to the right. Provided by Jeon Ok-ju

Citizens who were moved by her speeches rallied to her. Her talent led some to believe she was a North Korean spy.
On her second day of making speeches she was grabbed by several citizens who claimed she was involved in espionage. Although she would later clear herself of the charges, she believes the so-called citizens were soldiers in disguise.
“I heard that some soldiers wanted to eliminate me as I was one of the movement’s most famous voices,” she said.
Jeon found herself in the hands of the police after the movement had been suppressed. She was subjected to beatings and water torture for weeks.
“Intelligence agents accused me of being a North Korean spy with the secret code name ‘Peony Flower’” Jeon recalled. She was sentenced to 15 years. The following year she was released by special pardon.
Jeon left Gwangju for Seoul, where she met her husband and raised children. “I lost so many things in Gwangju,” she said. “I had to leave.”
After moving, she felt happy, although she made only a poor living, selling fried potatoes on the streets of northern Seoul.
“I could not get a decent job. Whenever I did, I would be fired after a few days for no reason” she recalled.
Life has not been easy for her, and she still feels great sadness about what happened in Gwangju.
“If it were not for my speeches, maybe more people would have chosen not to join the movement and saved their lives,” she said. “This is why I still feel guilty and pray for their souls.”