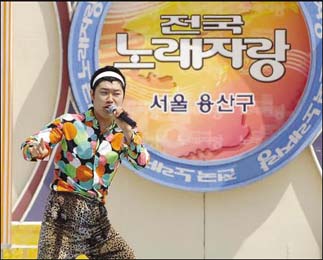 There is a certain beauty in things that are always there. They may not demand your attention, but come rain or shine they are a presence. Their sheer existence brings a certain degree of warmth. This is the kind of comfort and charm that the TV show, “National Amateur Singing Contest” brings to Korean audiences every Sunday at noon on KBS1-TV.
The show tours around small towns, visiting a different one each week to stage a singing contest. There are no hotshot singers or top orchestras, but the makeshift stage allows the locals to make the most of what may be their one and only TV appearance. Winning the show hardly guarantees being a Korean idol, but they are the heroes for a day and that seems to be enough for performers who like their day jobs.
As one of the longest-running TV programs, the show has been on-air since 1980, aging together with the M.C. Song Hae. Song, whose name in English befits the nature of the show, is now 80. He started his career as a singer and comedian, but there is no argument that he is now inseparably associated with the show.
The singing contest is not “must-watch TV” but it has become a pleasing part of the Sunday routine. I have never stayed in to watch the show, but I run across it in restaurants, where waitressing ajummas ignore my requests for extra kimchi because they are concentrating on singing (and sometimes dancing) along with the show’s songs. I don’t criticize the ajummas for this because no one has the right to take away their Sunday fun.
The enthusiasm of the locals on stage is contagious, and viewers smile at their amateur dancing and singing. It’s also a chance for locals to boast about their town, and it has become the show’s routine for several people to bring their regional specialty, like peaches or rice cakes, to share them with the M.C. and the band.
In this homey atmosphere Song, the grandpa-next-door M.C., sometimes allows little boys or girls on stage, which happened during the latest episode, which took place in Yeongi, North Chungcheong. Six-year-old Miss Kim So-yeong was glad get an unexpected payment of 10,000 won ($11) in exchange for showing off her dance moves, which made the audience and TV viewers smile.
Other contestants on the show included Lee Seon-dong, 66, who introduced herself as the “person who would improve the county’s livelihood if she was president” and “a big mama who loves to tap dance.” Another impressive contestant was the 93-year-old Oh Sun-chang, the president of the county’s group of the elders. Song bowed to the white-haired gentleman and they sang together when the contestant’s voice began to grow hoarse near the end of his tune. From a 47-year-old office worker to a 20-year-old job seeker, the contestants had a good time, regardless of the prizes. Some contestants had no singing talent, and they had to leave the stage when the judges rang the bell, but they retired from the stage with winning smiles.
There are about a dozen contestants each week, and the audience, mostly their friends and families, holds banners like, “Way to go, Charisma Park!” or “You’re the best, my friend!” So the show is not a simple singing contest, but a feast day for the town.
People may call it a hillbilly show, yet many still watch. AGB Nielsen Media Research last month announced that this show is ranked top among weekend entertainment shows, despite steep competition from programs with hotshot stars that air primetime. The show has won an audience rating of 10 percent for years, proving that it is nationally beloved show many years in it yet.
“This show is like your home, where you can enjoy yourselves in comfort,” said Song on last Sunday. I agree and I hope the show will be still there when I am 64.