[Talk of the town]Hair raising refusal causes loss of face

[Talk of the town]Hair raising refusal causes loss of face 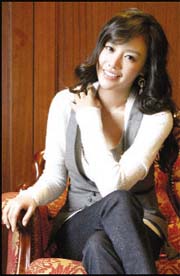 The chance of a lead role in a promising soap opera or movie is unquestionably a golden opportunity for actors to demonstrate their potential. Thus Kim Ah-joong (picture right) and Cha In-pyo must have felt awful for declining such offers on account of their hair.
After her success in the movie “200- Pound Beauty,” Kim gladly accepted the lead role of Ko Eun-chan in “Coffee Prince,” a popular drama that boasts an audience rating of 30 percent ― until she realized that Ko was a cross-dressing young woman. This meant that Kim’s long, shiny hair had to be cut. Kim’s manager, Kim Eun-joo said, “Unfortunately, as a shampoo model, Kim is forbidden to get a haircut at any time under the shampoo contract.”
Cha In-pyo also missed his chance to perform in “May 18,” the box office success about the Gwangju uprising. Already acquainted with both the film’s director and distributor after his part in “Mokpo Harbor,” Cha seemed perfect for “May 18.” However, he was promptly replaced, when the director decided his curly hair was not fit for the role of a strict teacher. Yoon Eun-Hye and Son Byung-ho snatched up the respective roles. By Lee Seung-eun