[Talk of the town]Ice princess fried by Web heat

[Talk of the town]Ice princess fried by Web heat 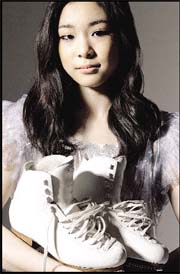 Beware of the wrath of the Korean teeny bopper.
The cable TV show “School of Rock” last week, Lee Hyuk, 24, told his costars that national figure skating champion Kim Yu-Na had rejected his friendship request on the social networking site www.cyworld.com. Lee, of the boy band Super Junior, claimed she declined his offer while the two were shooting a school uniform advertisement together.
A query for Kim’s Cyworld “mini homepage” topped lists in many Korean Internet search engines as angry fans wrote hateful messages on the page. “You should apologize on TV, you bitch,” wrote one Super Junior fan. On her blog, Kim, 16, denied that she had refused Lee’s amiable online overtures.
Lee, whose real name is Park Jeong-soo, recanted his prior statements on air a few days after the vitriolic comments against the ice princess shook the online community. On the radio program he regularly hosts, Lee said he got carried away because he wanted to pump up the liveliness of the show. He apologized to Kim and her fans for causing them grief.
Kim recently placed third at the 2007 ISU World Figure Skating Championships, setting a benchmark for Korean skaters, who have never won a medal at world events. Lee’s group Super Junior earned accolades shortly after their 2006 debut, accumulating a long list of music awards.
By Renee Park