Among the members of Mindeulae, Kim Young-suk is known as “Eun-seon’s mom,” which is her way of reminding herself of a decision she made almost three decades ago and has often regretted.
In 1978 Kim signed an adoption consent form and felt so much guilt and shame that she kept her past to herself as a punishment.
She once vowed to never reveal her secret past to anyone, not even her other daughter, Eun-seon’s older sister.
Kim’s trials and tribulations began when she lost her husband in a car accident at the age of 28.
She was left with two children, aged three and one, and no insurance, government subsidy or support from her family.
Within a few months she ran out of money to pay her rent, but nobody would help her. She turned to her mother in-law, but her pleas were rejected.
In 1978, Kim felt she had no good choices left. She took her youngest daughter, Eun-seon, to an adoption agency in northern Seoul and signed an agreement to relinquish her daughter that same day.
The child was turned over to Holt Children’s Services and, a few weeks later, to a family who lived in the Dutch countryside.
Then, until Kim’s daughter contacted her in 2004, she had no idea where her daughter had been taken or whether she was alive. Over almost three decades she had never received a single phone call, photograph or letter from the Dutch family or the agency. 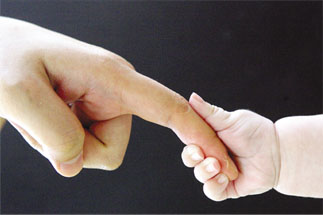 Seventy per cent of Korean single mothers give up their children for adoption. [JoongAng Ilbo]

For three years after she signed the adoption consent, Kim visited the adoption agency to get basic information about her child’s status. But she was repeatedly rebuffed by the agency’s secretary who said she was protecting the privacy of the child’s adoptive parent. When Kim insisted, the agency accused her of behaving capriciously when she gave up her child.
Overwhelmed with shame, she never returned to the agency and never really moved forward with her life either. She never remarried and kept the same phone number for 30 years, so her youngest daughter could find her mother.
Her rights as a birth mother, as with most Korean women who gave up their children, were effectively terminated by the adoption procedure.
Many Western couples who want to adopt a child continue to choose a Korean baby because the rights of birth mothers in the adoption registry here are deliberately skewed to give more power to adoptive parents.
This is in stark contrast to Europe or the United States, which allow birth mothers to select the child’s adoptive family and location, making it much easier for reunions to take place later.
Using global networks like GOAL ten percent of Korean adoptees were able to find their birth mothers, five times the rate achieved by those who used domestic agencies.
The figure suggests a major gap in the Korean adoption service, which sent an estimated 160,000 to 170,000 Korean children abroad since the end of the Korean War and is one of the largest suppliers of children to adoptive families in the United States and Europe.
Access to information is also limited and most adoptees must return to Korea if they hope to find their birth parents. Birth and health records at Korean orphanages have frequently been lost, as many have closed or otherwise disappeared and many adoption agencies refuse to reveal a child’s information.
“There are some very complicated situations involved in overseas adoption,” says Kim Tae-ok, a social worker at the Eastern Social Welfare Society, one of the four major adoption agencies in Korea. “When a teenage adoptee returns to Korea to find their birth mother, for example, should we send them back or tell them straight out that their mother has married another man, as often happens, and has no intention of meeting her son?”
Until recently, birth mothers had little claim over their children. For years, they played silent roles in Korean society, mainly due to the condemnation they face as a result of giving up their children.
The rights of birth mothers are not specified in the current laws governing adoption, leaving most agencies to develop their own policies.
As a general rule, however, most adoption agencies admit they rarely release information about adoptive children or their adoptive families once birth mothers have signed the adoption papers.
“It was a common practice among adoption agencies not to tell birth mothers which country their children had been sent to,” says Park Yun-gyeong, another social worker at the Eastern Social Welfare Society. “When the mothers requested, the social workers were often advised to say that their children were adopted to a very nice family, and are living happily, and leave it at that.”
Now, depending on the agency, birth mothers can be given the name of the adopting country and the occupation, number of other children and religion of the adoptive parents, but this does not always happen. 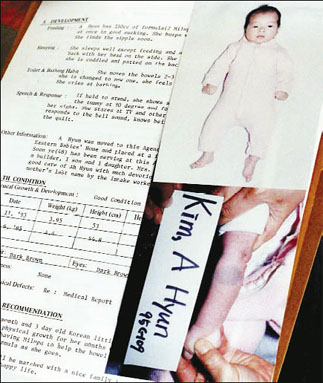 The file of a child who is being adopted by an overseas couple. [JoongAng Ilbo]

Mindeulae, which was formed to encourage domestic adoption, is one of the first groups of Korean birth mothers to become vocal about the issues involved with international adoption.
“Korean mothers are expected to risk their lives for their children,” says Kim Sun-hee, another birth mother who sent her son to the United States. “Birth mothers who offered kids for adoption put up with lifelong shame, because we keep the guilt inside us for giving up our children so we could survive.”
During a recent protest near a subway station in northern Seoul, a group of birth mothers and adoptees held placards that said, “My baby, my hands ― Korean babies not for export.” As part of their campaign to stop international adoption they were trying to gather a million signatures on a petition calling for an end to the practice.
Among the adoptees, however, the idea of advocating domestic adoption comes with some mixed emotions because the campaign might be seen as a negation of their own adoptive parents, with whom many maintain a solid relationship.
In a handout explaining the protest, Jane Jeong Trenka, a U.S. adoptee who organized the event, tried to clear up their concerns.
“Your participation does not diminish your love for your adoptive family,” she wrote. “Participating does not mean you are angry or ungrateful. Your participation only means that you believe South Korea can and must take care of its own children from now on.”
The campaign to raise awareness of domestic adoption is hardly new in Korea.
Over the past few years the Korean government has tried to promote domestic adoption, suggesting it as an alternative to in-vitro fertilization for couples who have difficulty conceiving and to reduce the stigma of being known as a “baby-export” country.
Last year the Ministry of Health and Welfare introduced a law that requires all adoption agencies to try and find Korean parents for the first five months of a child’s registration. The new law also extended the right to adopt to single parents and to couples with five children or more.
Yet the number of children being sent overseas for adoption hasn’t fallen since the law was passed.
One reason is the ongoing fear that people will know a child is adopted. The other is the emphasis on blood, which limits the children some adoptive parents are willing to accept to infants with the same blood type.
There is also the steady demand from adoptive parents in the United States and Europe, who pay higher compensation to Korean adoption agencies than the small subsidy provided by the Korean government for domestic adoptions.
This situation conflicts with the 1989 United Nations Convention on the Rights of the Child and the 1993 Hague Conference’s Convention on the Protection of Children, both of which encourage domestic over international adoption as the most important principle of an ethical adoption policy. 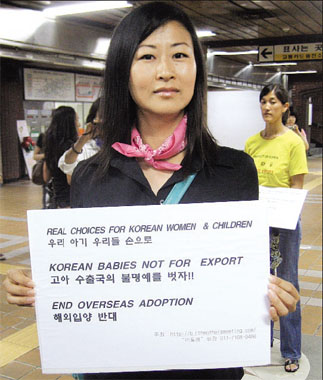 A United States adoptee at a recent protest against international adoption. By Park Soo-mee

“Adoption agencies have been criticized for not making other efforts to provide the conditions the children need,” says Huh Nam-soon, the professor of social welfare at Hallym University. “It’s very likely that many Korean children were sent to places where adoptees were in demand, instead of agencies looking for families that would better suit the child’s needs.”
The adoption agencies, who are seen as the conspirators in the overseas scene, blame the rigid social structure of Korean families as a major factor blocking domestic adoption.
“It’s not the government or the agency that determines adoption decisions,” says an anonymous official at Holt Children’s Services. “It’s the families who decide. The reality is that adoptive parents in Korea are still far more selective about which children they are willing to adopt. That’s why overseas adoption is inevitable if we are not going to keep children in orphanages.”
Had she known about the full implications of an overseas adoption, Kim says she couldn’t possibly have gone through with the process
“Now I know the pain too well,” she says.
Remarkably, her daughter managed to find her through GOAL four years ago. However, when they finally met, Kim felt there were vast layers of separation that set them apart from each other.
Language was one thing, along with cultural differences ― Kim could not convey to her daughter her family’s situation and the social stigma that single mothers faced in Korea at the time when Eun-seon was born.
During their farewell she also sensed Eun-seon’s frustration at hearing tales of poverty because her daughter could see how vibrant the Korean economy had become.
At the airport, before her trip back to the Netherlands, her daughter, who had remained calm and sympathetic during her visit, turned cold and told Kim, “I understand your choice, but I’ll still have to put up with being an adoptee for the rest of my life.”
The two continue to exchange letters and gifts and visit each other. Their case is known as a relative success among the birth mothers.
Others stop making contact a few years after their reunion, realizing the gap had grown too big. Kim also finds that the gap she sometimes feels between herself and her daughter feels more like a chasm.
“If she had spoken Korean she would have felt my desperation,” she says. “If I had told her that I committed a mortal sin by giving her up, at least she would know what that mean. That’s the real tragedy of overseas adoption. Your child becomes the closest and most distant stranger.”