A bookworm on the road to Incheon

A bookworm on the road to Incheon 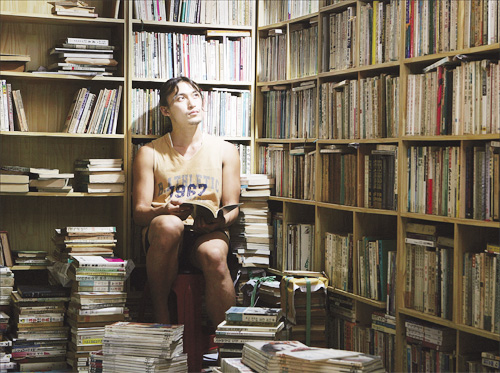 Secondhand book lover Choi Jong-gyu at his library on Baedari Road in Incheon. By Jeong Chi-ho

INCHEON ―Choi Jong-gyu’s first act of rebellion turned out to be quite fruitful. After an unsatisfying year as a freshman at the Korea University of Foreign Studies, he quit school, left home and started delivering newspapers.
This however, wasn’t a typical impulsive decision of youth, as the move provided a concrete platform for his aspirations.
“I felt stifled after the first semester. I couldn’t connect to the environment ― the way the curriculum was set up, the professors and my peers. Delivering newspapers suited me. The job was done at dawn. My working hours didn’t expose me to the dirt and noise of the world around me, plus, I got to read all the newspapers for free,” he said, sitting on a stool in his small library in Incheon.
The job served as a prelude to what would become a love affair with the written word. The day after he quit his newspaper round Choi joined a publishing house, first in sales and then later he helped to publish a new Korean dictionary.
In early 2004, he released a book titled “All Books are Used Books” and in 2006 wrote another called “A Year in Secondhand Bookstores.”
In “All Books are Used Books” Choi offers his own index of Seoul’s secondhand bookstores with useful tips like “Yongsan’s Ppuri Bookstore has, along with Golmok Bookstore, the fastest rotation of books. Hongdae’s Ongodang has a lot of photo books and the Saehan Bookstore specializes in science and engineering texts.”
This year, he started a one-man, bimonthly magazine titled “Our Language and Secondhand Bookstores,” which documents the history and present condition of Korea’s many secondhand bookstores, a section on the correct usage of Korean terms and idioms as well as feature stories about bookstores and the Korean language.
Choi, 32, is the product of his own determination. “It’s so rare to see a young person pursue something like old books with such passion” said Jeong Tae-young, who co-own’s Daeyang Books in Seoul’s Hongjae-dong with his father. “I do this for a living and often get tempted to try something else,” he said. “Choi’s passion has often inspired me to stick to with this store.”
In 1994, as a freshman in university, Choi started an online site dedicated to used books and the Korean language, which he operates to this day. Since the early 1990s, he has been to different used bookstores every day to rummage around for an hour or so.
Choi doesn’t use public transport ― instead he rides his bicycle from Seoul to Incheon and back, a distance of around 40 kilometers (25 miles), at least one day a week. “I find the people I meet along the road more interesting, and riding a bike doesn’t harm the environment.”
Choi writes every word of the 180 pages in his bimonthly publication. However, he is vexed when he thinks about the gaps in his knowledge.
“There are thousands of secondhand bookstores outside of Seoul and Incheon which I haven’t been to or written about,” he said. “My goal for the magazine is to produce 100 editions, but to cover every bookstore I would need at least a thousand editions and that’s impossible to achieve in one lifetime.”
He went to a secondhand bookstore for the first time during high school, when he visited Incheon’s Arbel Bookstore in search of a German-language book that was out of print.
As a student, he started frequenting secondhand bookstores to get rare books at bargain prices.
After he graduated from high school his boundaries extended to include stores in Seoul.
“After a while, I realized that secondhand bookstores are places that stock books which people want but might not be the best seller that week or month,” he said, as he explained the difference between secondhand bookshops and big name bookstores that get fresh stock every day.

From the top: Postcards from the edge of the bookselling world ― snapshots of fellow bookworms looking for bargains and rarities, all displayed in Choi’s Baedari Road library. By Choi Jong-gyu

“If you look at Kyobo Books, their bestseller list helps their sales to a tremendous extent. One of their top five books will sell thousands of copies per week when it first gets listed. People can’t buy every new book that comes out, so Kyobo list the most popular and tries to maximize their revenue, whereas in secondhand bookstores that’s impossible. Even if a book is popular, there will be a limited supply.”
Choi explained that secondhand bookstores, if they are operated properly, are not involved in popularity contests between different books. They also trade off the element of chance, as well as the enjoyable pursuit of a rare book.
Despite his affection for used books, he regularly goes to the big stores selling new books.
“It would be very unbalanced if I only went to used bookstores. In Tokyo’s Kanda District [known for its secondhand bookstores] there are about 150 bookstores and secondhand bookstores ― new bookstores and libraries of various sizes coexist,” he said.
Unlike other countries with a larger demand for secondhand books, such as the United States and Japan, Korea’s secondhand bookstores are in decline.
While New York’s Strand Bookstore, for example, has been renovating and expanding, the bookstores in the Cheonggae Stream area’s used bookstore alley are becoming smaller and many specialize in books for middle or high school students which are guaranteed to sell.
“After the renovation of Cheonggae Stream, the area has become much more expensive and the store owners are finding it harder to stay afloat,” said one owner of a secondhand bookstore in the area as he was closing his shutters at 7:30 p.m. with no more customers in sight.
Baedari Road, the original secondhand bookstore row in Incheon is also threatened. Incheon city government announced that by 2011 there will be a 2,570 meter long 12-lane highway laid down on Baedari Road.
The street started out with vendors and food stalls after the Korean War. In the 1970s, it began to bloom as a cultural hub for university students and scholars with around 40 secondhand bookstores.
The area is also rich in history with two schools that have stood there for more than a century, including one of the first private schools in the country, built in 1892. The Incheon Brewery, opened in the 1920s, is also part of the neighborhood.
Choi is a member of Vaddari, a group of Incheon citizens dedicated to protecting the district from encroachment of the asphalt jungle.
“It’s nonsensical because the government is planning to build an apartment complex and a shopping mall along this huge highway,” he said. “First of all, it would be so noisy that nobody would want to live there.”
Choi said the road plan is the worst kind of wastefulness. “They [the Incheon government] are using tax dollars paid by citizens to make the people’s living conditions worse, not to mention stripping them and others who do not live in Incheon of their cultural assets.”
In response to the group’s objections and other complaints about the plan, Incheon Mayor Ahn Sang-su has proposed an alternative to the full-scale road project.
However, the city’s road construction department isn’t backing down, stating, “It is impossible to cancel this, but we are looking at the possibility of narrowing the highway.”
Choi’s library is on Baedari Road. “I put the library here because the street has had special meaning for me since I was a kid growing up in the Incheon area and being a book lover,” he said as he hung up black-and-white photos he took during one of his bookstore escapades.
“I remember him [Choi] once talking about the phrase ‘the joy of living in reverse’ [which was the name of Daeyang Bookstore’s Web site, which it borrowed from the title of a book],” said Jeong. “He compared the phrase to the used book business. He said that, in a way, it’s funny to see those looking for used books spending so much effort searching through books that others deemed to be past their peak.”
“New books will someday be used books and somebody has to take care of them,” said Choi. “They’re all books. I just like communicating through these objects and if someone can read a small fragment of what’s underneath my surface through these books, that’s all I can ask for.”