A soothing escape from the cicadas

A soothing escape from the cicadas 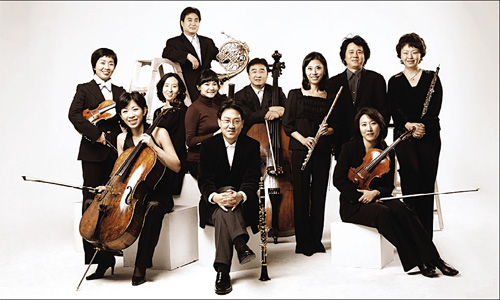 If the racket made by the monsoon cicadas hasn’t deafened you, kill two birds with one stone this month by venturing out to the Summer Chamber Music Festival hosted by the Seoul Arts Center.
From Aug 10th to the 17th, a series of musical enchantments will provide an aural balm to aching ears. Professor Hong Seung-chan from the Korean National University of Arts will act as a commentator for each performance.
The festival opens on Friday with the Korea-Japan Woodwind Ensemble. The group features three Korean musicians on the horn, clarinet, and bassoon, and two Japanese playing oboe and piano. On the following afternoon the Contemporary Music Ensemble SORI will feature music from the 20th century including work by young composers such as Kim Yoo-ri’s String Quartet III.
On Sunday the Quartet Ullim, consisting of former colleagues from the Seoul Philharmonic Orchestra, will play selections from Haydn, Beethoven, and Brahms.
Next Monday baroque music masters from the Camerata Antiqua Seoul will perform J. Pachelbel’s Canon and Gigue in D Major for 3 Violins and Basso Continuo, among other pieces.
This event will feature ancient instruments not commonly seen in performances, such as the viola da gamba.
The Seoul Saxophone Quartet is scheduled to play Vivaldi’s “La Tempesta di Mare” and ten other pieces from well-known composers next Wednesday.
On August 16 The Quartet and Quintet Hwain, from Seoul National University and Ewha Womans University respectively, will play 11 pieces, including Ravel’s “Bolero” and Mandel’s “The Shadow of Your Smile.”
The festival will raise the curtain one more time with the Seoul Chamber Orchestra’s performance next Friday.
Under the baton of conductor Kim Yong-yun, the 30 seasoned musicians have a varied repertoire planned to toast the festival’s finale.