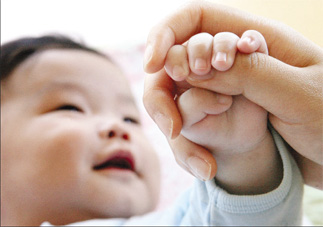 A child at Holt Children’s Services in Seoul who will be offered for adoption. A group of mothers of children who have been adopted are trying to stop foreign adoptions in South Korea. [JoongAng Ilbo]

A group of mothers who gave their children up for adoption by foreigners in the ‘70s and ‘80s have begun a campaign to end overseas adoption.
The mothers are united by the belief that overseas adoption is not in the best interest of children and that Korea should be ashamed of its reputation as a “baby exporter.”
The group, called “Mindeulae,” which means “dandelion” in Korean, a flower that symbolizes “longing of the heart,” has been working with Jane Jeong Trenka, a United States citizen who was born in Korea and adopted by American parents.
The group says that recent measures taken by the government to encourage domestic adoption have been a failure and that the tide of Korean children being sent overseas is unabated. They are seeking 1 million signatures on a petition urging the government to do more.
Seventy percent of single mothers in Korea give up their children for adoption. In 2005, the last year for which reliable figures are available, 2,101 Korean children went to new families overseas.
“Participation [in our campaign] only means that you believe South Korea must take care of its own children from now on,” said Trenka.
Mindeulae also claims that Korea’s adoption laws, which offer no specific rights to birthmothers, make it far too difficult for birth mothers and adoptees to find each other in later years.
Only 2 percent of more than 13,000 adoptees who had family search counseling last year were reunited, according to the Ministry of Health and Welfare.