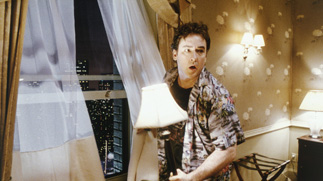 Perhaps Koreans and Americans are entertained by different things. I concluded this on the elevator ride down from the theater where I’d just seen “1408,” director Mikael Hafstrom’s latest release. To me, the film, based on a Stephen King short story, is as unsettling and terrifying as you’d expect from the master of mass-market horror fiction. But while I walked away pleasantly surprised by 1408, I heard my Korean counterparts mutter, “That was no fun,” as they stepped off the elevator.
The movie opens on a dark and stormy night ― sounds cliched, but patience, please. We find Mike Enslin (John Cusack), driving down a rural road during this downpour on his umpteenth visit to a haunted house. Once a serious writer, Enslin ― oozing wry skeptical wit ― now hunts for ghosts and pens books like “10 Haunted Hotels: A Ghost Survival Guide,” which usually end up in bookstore bargain bins.
From the beginning, Enslin doesn’t quite fit in with his surroundings. Too curt with warm innkeepers; too dark and brooding while living among carefree, blond Californian surfers; garish in his Hawaiian shirt during his visit to New York; the list goes on. For much of the film, Enslin is little more than a solitary boozehound to the audience, quite the unlikely hero.
It is in one of these sore thumb outsider moments that Enslin receives a mysterious postcard from New York City’s Dolphin Hotel reading, “Don’t enter 1408.” Despite the hotel’s best efforts to keep Enslin out, he manages to book the doomed room ― the film’s namesake.
Samuel L. Jackson plays Gerald Olin, the Dolphin’s manager, who tries everything ― horror stories, newspaper clippings, even an $800 bottle of liquor ― to prevent Enslin from entering the room. But the cocky ghost hunter ends up in the room, muttering, “This is it?” at his generic, comfortable surroundings.
But, of course, that isn’t it. Almost from the moment he shuts the room’s door, mayhem ensues ― the end of the toilet paper roll which Enslin has just used mysteriously gets folded down, the radio alarm clock randomly blasts The Carpenters’ “We’ve Only Just Begun,” the window slams on his hand. Throw in some swigs of the pricey whiskey, and Enslin’s well on his way to audio-taped, narrated lunacy ― or is he not actually imagining all this?
Flickering specters begin to walk through the room, leaping out the window. A raging bum appears, nearly bashing him to death. The room’s walls begin to crack and secrete murky liquid. Home videos of his dead daughter flash on the screen and the room echoes, “Daddy? Daddy?”
And this is when we realize that Enslin is a loner for a reason; still coping with the death of his daughter, he is estranged from his wife, Lily, who lives in New York. Desperate to get out of the room, he resorts to video calling her through the webcam on his laptop. Then, just as Lily is about to come to the rescue, it appears the you-know-what has just hit the fan and Enslin is doomed.
Simply put, 1408 is deceptively, refreshingly different from your average summer fright-fest. Hafstrom’s first person camera angles heighten the film’s impact on the senses. In a moment when Enslin’s hearing muffles, so does the audience’s. When Enslin washes up on the beach after a surfing spill toward the film’s beginning, the audience, too, feel as if they are lying on their backs, looking up at a surfer who asks, “Dude, are you all right?”
Other strengths include the haunting, ominous score, absolutely convincing special effects and a script that throws the audience completely off track. John Cusack puts on a fantastic one-man show, carrying the plot. Compared to this summer’s dreadful releases like the Fantastic Four sequel and “4.4.4.,” 1408 is a welcome alternative.
Some may complain about the repetitive theme of one man’s plight to escape a room. But Hafstrom uses repetition in a “Groundhog Day” sort of way. One of the film’s unsatisfying loose ends is Jackson as Olin. Does he have sinister intentions for Enslin? Does he support the film’s outcome?
Questions aside, 1408 does what it intends: it scares. After all, I wasn’t the only one screaming in surprise in the theater. And I’m probably not the only one still having trouble sleeping.