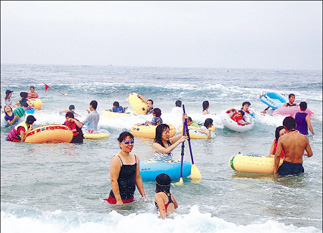 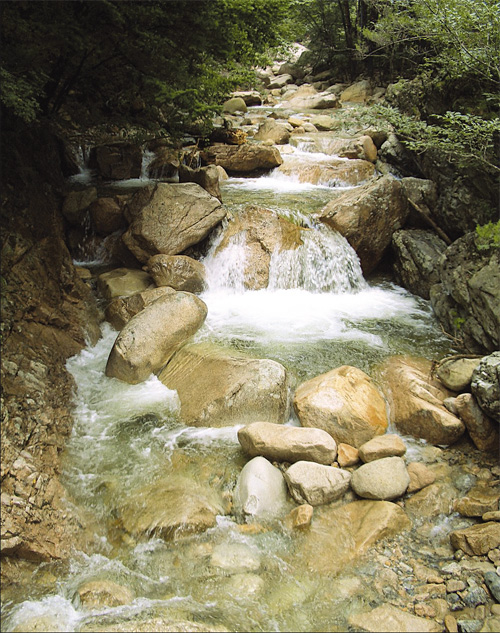 Right: A stream tumbling down a Seorak Mountain valley.

I had never been much of a hiker. Call me vain, but every time I accidentally tune into the fishing channel on cable TV and catch glimpses of mountain ranges, I have a hard time understanding the allure of schlepping up a steep trail only to come down again perspiring and red with sore legs.
Thirty minutes into a four-hour hike on Seorak Mountain, Gangwon, my attitude changed completely. Standing at 1,708 meters, it is the third highest in South Korea after Halla Mountain on Jeju Island and Jiri Mountain in South Jeolla.
Besides the verdant summer trees, there was the water, tumbling over the falls and glazing the streams with a glacial shimmer.
Then there are the rocks in the jade green water and on the pathways which, with time, have been weathered into a vast array of shapes and sizes, some ash gray and others looking like ivory, accentuating the transparency of the mountain streams.
Walking and walking, I couldn’t imagine an end to this gigantic mountain range ― it was a force incomparably bigger than me or my misguided opinions about mountain hiking.
I was smaller than the shortest tree and the aggressive whirlpools in Seorak’s otherwise genteel streams looked like they would swallow anyone who got too close. 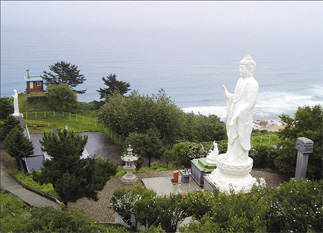 It was a whole other world inside the valleys of the mountain range. The ethereal sunlight passing through the branches was in stark contrast to the fluorescent glamour of Seoul, and it softly blended the palette of colors on the mountain.
The hike was through naeseorak, on the west side of Seorak Mountain, starting from Baekdam Temple in its foothills.
The temple, built during the Three Kingdoms era, became a modern tourist attraction because of two earlier guests, the poet and scholar Han Yong-un and former president Chun Doo Hwan.
Han Yong-un, who was deeply influenced by Buddhism, stayed at the temple during the early 20th century to write three of his key works including his masterpiece, “Your Silence,” a book of poems.
Chun Doo Hwan came after he had been banished by former President Kim Young-sam during the late 1980s, when the student revolt was in full swing and Chun’s leadership was under scrutiny. 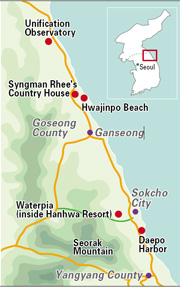 To reach the base of the hiking trail, visitors ride a shuttle bus up to Baekdam Temple and start from there.
As I waited for a bus to come in, a disturbingly Korean kind of moment took place.
I was sitting on a long bench next to the shuttle bus station. A man sitting in front of me suddenly beckoned to a noisy group of women who cut to the front of the line, waving back at their friend.
Hissing and other murmurs of disapproval spread quickly to the end of the bus line. When the group reached the front, the man insisted on giving up his seat to an elderly lady in the group, saying, “No, please take the seat. You must be tired.”
“Such typical Korean gang culture behavior,” grumbled one man. “Chun Doo Hwan would be proud.” He was alluding to the fact that these people, while being oblivious to the inconvenience of others outside their group, were unconditionally loyal to their own.
After two hours of hiking, I reached a rest area with a food stand that offered ramen, eggs and other snacks as well as cold drinks and coffee.
The ramen was sold for 4,500 won ($5), or seven times its original cost, but considering that the owner has to hike up and down these paths every day carrying items for sale, I thought it was a fair deal.
There is an old Korean saying, “Hunger is the best side dish,” which I have always thought was rather banal until my Seorak adventure, when I experienced a textbook example of its meaning. After climbing for four kilometers, I had to stop myself from inhaling the ramen. It was the best bowl of instant noodles I have ever eaten. 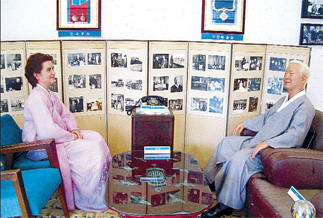 Models of Syngman Rhee and his wife Francesca, at the Rhee Country House.

After the quick lunch, I started my walk down. A few times, I stopped by streams and sat on their banks. My feet, which had labored like never before, felt as if they were sizzling like lit matchsticks when they met the chilly water. I dampened a handkerchief I had brought along and cooled down my face and neck.
Besides the inspirational hike through Seorak Mountain, I engaged in some other activities that Gangwon has to offer during my three-day trip.
Numerous beaches line the coast nearby and I stopped at Hwajinpo, close to the Hwajinpo lagoon. As it is high up in the northern part of the province and close to Seorak, its water and beach are quite clean.
Even with a bit of a drizzle and a sharp breeze, there were many families crowding the beach and swimming in the ocean. The kids would cling tightly to the middle of giant, inflated inner tubes as their parents held on to them screaming “Don’t go too far!”
Next to the Hwajinpo lagoon are three summer houses that belonged to key political figures from Korean history ― Syngman Rhee, the nation’s first president, Lee Gi-bung, Syngman Rhee’s vice president and Kim Il-sung, the founding leader of North Korea.

For 1,500 won visitors can enter all three residences as well as the Syngman Rhee Memorial Building which displays a collection of articles he used during his life time.
My other water-related experience was at Waterpia, a 16,529 square-meter water theme park inside Hanhwa Resort in Sokcho, which includes everything from waterslides and man made waterfalls to a water massage area, spa baths and kiddie pools.
The entrance fee was almost 50,000 won per person (depending on the hour, the price ranges from 40,000 won to a little more than 50,000 won) and I arrived late at night after a big meal of sashimi and maeuntang (spicy Korean fish stew) in Daepohang, a harbor in Sokcho, known for its fish market and sashimi restaurants located next to the sea.
I deemed that the outside spas were my safest bet, given the mass of screaming kids in the swimming pools who looked like a swarm of little dots from a distance. I stepped into a relatively vacant spa, smelled urine and almost gagged.
As I ran to the locker room, I knew it was a mistake to go to a family water park during the peak summer vacation period.
I couldn’t help wishing I was back on Seorak Mountain, dangling my feet in the icy cold streams with their appearance of virginal purity.
During the 8-hour ride back home to Seoul ― it usually takes around three hours ― I found myself escaping the interminable traffic jams by daydreaming about going back to the mountain, and hiking up its trails with an occasional generous breeze to cool my sweating brow.
I suddenly had a longing for the fishing channel.

Seorak Mountain
Stretching across Gangwon, from Sokcho to Injae, Seorak Mountain is the third-highest mountain range in South Korea, with an area of 354.6 square kilometers. The Daechong Peak stands at 1,708 meters. It opened as a national park in 1970 and includes many hiking trails. For more information, call (033) 636-7700 or visit http://seorak.knps.or.kr.

Accommodation
The Suites Hotel Naksam ― This is a relatively new chain of hotels (there is another in Jeju) and this branch is located in Naksan, Gangwon, with a clean, modern interior and a nice clear view of Naksan Beach. The rooms range from singles to royal suites. Prices for rooms vary according to season but the average range is from 200,000 won ($220) to 400,000 won. For more information call (033) 670-1100 or visit http://naksan.suites.co.kr.
Seorak Hyundai I-Park Hotel and Condo ― This resort has both hotel and condo buildings. The condos include spacious rooms which include a kitchen, bed or Korean-style bedding. The Seorak Hyundai Resort is one of the most popular lodging destinations in Gangwon. Prices for rooms range from 100,000 won and up. For more information, call (033) 635-9300.