How much is that doggy on the menu?

How much is that doggy on the menu? 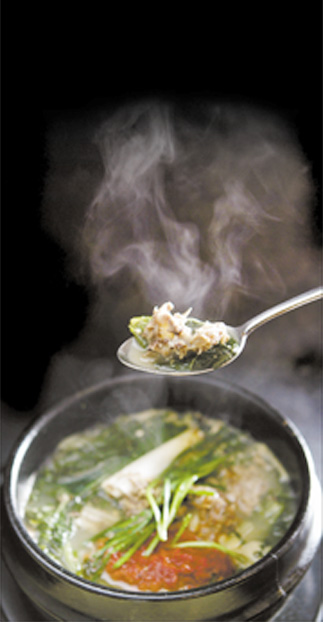 A spoonful of boshintang keeps one’s stamina strong ― or does it? By Jeong Chi-ho

The hot, sultry dog days of summer are here. People in different countries have their own way of alleviating the ennui and fatigue caused by heat. Ancient Romans reportedly ate snow cones and Emperor Elagabalus, known for his decadence, even had a mountain of snow erected in his garden to keep himself cool.
Our Korean ancestors also had ways to overcome the hottest days of summer, often called the three bok days. Defined by by the country’s ancient folk calendar, they fall in July and August. They often ate gaejangguk (dog-meat soup), which they believed replenished energy leeched away by the heat. Dog meat was plentiful when Korea was an agrarian society.
But things have changed. Korea is now an industrial society with large urban populations. The influence of Western culture, which regards dogs as pets, plus protests by the Korean Society for Animal Protection, have made some people have second thoughts about eating gaejangguk.
The issue becomes more controversial on bok days (the last bok day of this summer is next Tuesday) and Koreans are today in intense debate about the merits of dog meat.
Professor Ann Yong-geun of Chungcheong University waded into the controversy last month when he said that there is a nutritious property of dog meat that cannot be proven by Western medical science.
He said in a CBS radio program that although dog meat has less protein and fewer minerals than pork, chicken or beef, eating dishes like gaejangguk and boshintang (dog stew) mysteriously allow more energy to enter the body.
Drawing on folklore, others say that dog meat is good for stamina, the liver and the stomach, as mentioned in the Donguibogam, a medical text written by the physician Heo Jun in the Joseon Dynasty.
Also, dog meat eaters believe that the meat is low in unsaturated fat and high in protein with low levels of cholesterol. Some even argue that yellowish-brown dogs are more nutritious for men and that women should eat black dogs.
To sort out fact from fiction Bai Young-hee, a food and nutrition professor from Osan College, and Joo Jeong-ju, an Oriental herbal doctor, agreed to analyze the claims behind Korea’s dog-eating customs.

A bowl of gaesuyuk, boiled dog meat, being enjoyed in a Seoul restaurant. The average price of this dish is 18,000 won (

Why is dog meat recommended during summer?
Joo: In traditional herbal medicine, people have four types of temperaments: han, naeng, on and yeol. Han is the coldest and yeol, the hottest. Our ancestors ate food that best suited their temperament or nature and their environment. Ancient Koreans would categorize the temperament of grain, for example, depending on when it is harvested and what kind of soil or climate it was grown in. Barley is grown during fall and winter, so it would be categorized as having a cool temperament.
Our ancestors believed dog meat has a warm temperament. The blood circulates within the body and during the summer, most body heat gravitates to the outer layer of the body. This makes the body core cool and reduces stamina. Ancestors believed that dog meat warms the inside of the stomach, restoring strength. 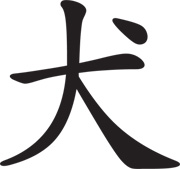 The Chinese character for dog.

Bai: It’s a tradition. Some people say that eating dog meat actually prevents sweating because dogs themselves don’t sweat through their skin but through their tongues. In reality there is very little difference between the temperature of the stomach in the winter and that found in the summer.s

How nutritious is dog meat?
Joo: In Oriental medicine we say it’s nutritious for those who lack heat in their body. In the past, dog meat was used as a medical treatment and not a delicacy. Ancestors believed that dog meat protects the body as a whole. In fact, many animals including goats, pigs, sparrows and crows were all used in Oriental remedies. It is hard to say which part of the dog is most nutritious or best for the body, although in olden times this claim was made for the genitalia. It is not a matter of how much protein or fat dog meat contains ― Oriental medicine is based on ancestors’ observations and experiences in nature.

Bai: One hundred grams of raw dog meat contains 60.1 percent water, 19 grams of protein, 20.2 grams of fat and 44.4 milligrams of cholesterol. It also contains vitamins, potassium, ash, phosphorous, iron and sodium. Compared to other meats or ingredients, dog meat has less cholesterol. There are 1,280 milligrams of cholesterol in an egg yolk, 82.4 in tuna and 65.2 in pork. Compared to beef, pork and chicken, dog meat isn’t high in protein. But it is true that its amino acid content is superior to other meats.

Is dog meat really good for stamina?
Joo: Yes, it is, especially gaesoju, or dog wine. Gaesoju is a fermented drink that is distilled by cooking the dog in a double boiler. Moreover, our ancestors used the dog’s penis in the gaesoju and as a medicine to supplement energy. But I repeat, most treatments of Oriental medicine were derived from nature and people’s experience.

Bai: All the ingredients of gaesoju are healthy to some extent. But the influence differs from person to person. For some, dog meat is good for stamina or post-operative recovery. Depending on an individual’s body structure, it can supplement nutrition.

Dog meat eaters say it is easy to digest.
Joo: According to Oriental medicine, dogs and chickens both have a warm temperament. Pork is cool and beef is both. Beef is good for all types of people but it cannot be used as a medical treatment because it does not balance warm or cold. On the other hand, dog meat is used to supplement body warmth. For example, for those who have a stomach disorder, gaesoju is recommended to balance their circulation and to help build up the digestive system.

Bai: Boiled dog meat is similar to beef but softer, making it easy to digest. This is why people in their 50s and 60s prefer eating the dish to beef.

Would you recommend dog meat for the body’s nutritional balance?
Joo: Personally, I don’t recommend dog meat or gaesoju to my patients. I have religious reasons as well as spiritual reasons. I recognize dogs as pets that share emotions with people. They’re different from cows and pigs, which are domestic animals.
But from time to time, I do offer a gaesoju herb remedy to those who have really weak stomachs who cannot even digest thin gruel. Oriental medicine is an experience-oriented science. Believing is more important than asking why.

Bai: Dog meat is not an essential food ― we don’t have to eat it in order to survive. In the past people believed they could benefit from eating dog meat. It is up to each individual whether or not to eat it. With changes in living patterns and eating habits, people suffer from different maladies. With such changes, concentrated treatments (Western medicine) are more effective than the so-called balanced ones used by Oriental medicine.