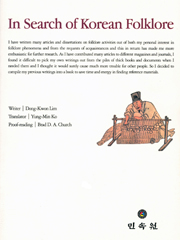 In Search of Korean Folklore

I knew I was rolling the dice when I pulled “In Search of Korean Folklore” off the rack at Kyobo Bookstore in Seoul.
Written by Seoul National University Professor Lim Dong-kwon and translated by Ko Yung-min, the book had a distinctly academic feel.
Still, flipping through the pages, the sections on folk religion and thought patterns in folklore caught my eye.
Who can resist a chapter called “Three Virtues of the Chicken?”
Divided into four sections and 23 chapters, the book is a collection of papers and lectures delivered by Lim over the course of his career.
In terms of flavor and readability, the section on folk religions was one of the best. Most of the practices described are related to Korean shamanism.
Lim begins with explanations of the deities and spirits that governed the lives of ancient Koreans. Scholars of the Joseon Dynasty (1392-1910) defined deities as positive elements and spirits as negative elements.
Spirits were believed to cause misfortunes from illness to anxiety to a loss of fortune. There were a number of approaches to banishing them.
One was to try to appease the spirit so that it would leave of its own accord. To that end, plates of food, drink and colorful clothing were offered to the spirit, which was believed to be able to enjoy the same pleasures as human beings. Singing and dancing were also used.
Spirits that couldn’t be tempted to leave were attacked. Mentally ill patients were confined in a room and beaten with the branch from the eastern side of a peach tree or shot with arrows made of peach branches to drive the illness out.
To drive away a spirit causing malaria, patients were taken to the cemetery at night where snakes were wrapped around their necks or they were made to kiss an ox.
It was also believed that the spirit of an illness could be captured in a bottle or jar or bound to some earthly item and then removed.
Any illness could be cured if the name of the disease and the phrase “Be removed 1,000 miles” were written on a piece of paper, put in an envelope and placed under the pillow of the patient. The next morning, before the sun rose, the envelope was taken out and “To the attention of Mr. Lee” was written on it. It was then thrown onto a busy street. The disease would then be cured, or at least passed on to an unsuspecting Mr. Lee.
Lim delves farther into Korean folklore than explanations of folk religions. In his opening chapter, he defines three phenomena that helped shape the Korean nation’s identity: the ondol heating system; an attitude that encouraged the enjoyment of life through song, dance and drink; and the custom of sharing, which Koreans are still imbued with at an early age.
Other sections include the image of women in folklore, etiquette and customs, an explanation of Korean festivals and agricultural traditions.
The structure of the book comes with the inherent risk that if he repeated himself in his lectures, he would do so in writing as well.
And he does.
Readers learn more than once that short people were once unwelcome on the day of the first full moon of the lunar new year because it was believed that years’ crops would only reach the height of the first visitor on that day.
Women were included in the list of unwelcome guests, though the explanation of why is unclear.
While there are drawbacks, the format has virtues as well.
Because the lectures were delivered independently, they allow readers to skip ahead to parts they find interesting without having to rely on the material that came before to be able to understand it.
While this is not always the most exciting book to read, In Search of Korean Folklore has parts that will capture and hold your attention.
By reading it, you may not throw double sixes, but the only snake eyes will be the ones wrapped around your neck.