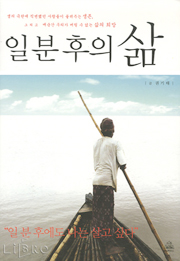 “Life After One Minute” by Gwon Gi-tae is a book based on interviews with 12 people who found themselves on the verge of death after leading ordinary lives. It’s easy to dismiss such books, given that there are a lot of pre-packaged self-help books out there. Gwon, however, has laced each story with so much desperation, humor and lightheartedness that her book works well and distinguishes itself from the crowd.
The author’s characters include a man who almost drowned after he was swept away by a giant wave ― it hit him as he stood on the deck of a boat traveling from England to Bangladesh. He was miraculously saved by a sea turtle who swam to his aid. There are other dramatic stories, like a teenage boy who tried to jump off a bridge and went on to become a top-ranked professional boxer.
The motivation for the book came after the author, who had worked as a war reporter in Iraq, discovered that the hotel where he had stayed in Baghdad was destroyed shortly after he returned to Seoul. Gwon also explores the unpredictable boundary between life and death through the story of Gong Ok-jin, a veteran traditional musician who was dramatically reprieved by authorities after they heard her sing prior to her scheduled execution during the Korean War Gong’s last wish was to perform a song for her executioners. The book is full of claims that truth and beauty can sometimes save people in moments of unexpected disaster. This, of course, is the age-old lesson that it’s crucial to live every moment as if it were one’s last.